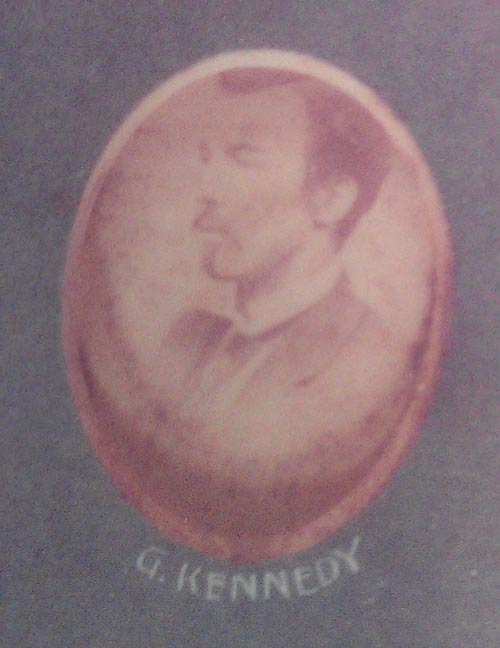 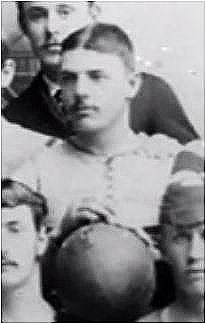 G. Kennedy also played for Melbourne and Royal Park prior to Carlton.

1868 Among the outstanding players for Carlton during the 1868 season.

1870 April 28
G. Kennedy is elected onto the committee at the Carlton AGM.

1871 April 27
Kennedy is elected onto the committee at the Carlton AGM.

1871 July 15
Played in the Carlton match against a Richmond 20 at Richmond Park, where Carlton could only field 15 players.

Variations of colour scheme, however, still intruded to annoy the critics-
G. Kennedy, the Carlton skipper, was taken to task for "attiring himself like a mountebank* and appearing against Melbourne on September 27, clad in SKY BLUE!"

See 1874 team photo possibly be Kennedy wearing lighter, Sky Blue guernsey?
He played in the match against North Melbourne on June 27 1874 possibly his only senior game for the year as he was "coach" of the Second Twenty.

1874 May 30
Former Carlton skipper George Kennedy umpired the match between North Melbourne and Melbourne in the Richmond Paddock.
The North Melbourne Advertiser said;
"Mr. George Kennedy, the late captain of the Carlton Football Club, acted as central umpire during the game, and completely satisfied both sides. During the whole game I believe not a single decision by him was objected to. This is as it should be, and now that Mr. Kennedy has given up playing, his services as a good honest umpire ought to be brought into requisition."

1875 An admirable skipper and cool effective player, retired from the first, but is enthusiastic as "coach" for the second division.
Scored one goal during the season for the Carlton Second Twenty.
(The Footballer 1875. p27,56)
Blueseum's emphasis: G. Kennedy preceding Jack Worrall who is recognised as the first official coach of any side in 1902, by 27 seasons.

From "The Footballer" 1876.
G.Kennedy, "The sky-blue skipper" (he's teaching them a wrinkle in South Australia)- a splendid general was George.
Everything You Wanted To Know About Australian Rules Football But Couldn't Be Bothered Asking. Graeme Atkinson. p205.

The South Adelaide Football Club website Honour Board lists;
1876 George D. Kennedy as their captain and top goal scorer with 2 goals in their inaugural year.

George D. Kennedy was also captain in South Adelaide's premiership year 1877, and in 1878 when they were runners up.
Team mate, and former Blue,
(W. H. J. Billy Dedman listed as 1877 top goal scorer for South Adelaide with 10 goals.)

1877 April 19 Thursday
There was a meeting held at the Prince Alfred Hotel King William Street to establish a Football Association. It was agreed that two delegates from each club would meet at the hotel on the following Monday. In the interim, George D. Kennedy was made the secretary pro tem. of the Association.
(Trove: South Australian Register, April 20 p5)

1878 April 9
George D. Kennedy presided at a meeting of the South Adelaide Football Club held at the Sir John Barleycorn Hotel, where it was decided to accept the challenge from the Carlton Football Club for a match to be played in Melbourne.

1886 The Australasian reporting on South Adelaide's visit to Mebourne, says the club was founded by former Carlton players George Kennedy and Sam A. Wallace.

-* mountebank according to www.thefreedictionary.com/mountebank
1. A hawker of quack medicines who attracts customers with stories, jokes, or tricks.
2. A flamboyant charlatan.

1888 May 18
George Donaldson Kennedy died from the result of building site accident. He was a carpenter working on the Grandview Hotel Alphington when on the second floor he slipped and fell. He was taken to the hospital in East Melbourne where he passed away an hour after being admitted.

1888 May 24
"And thinking about these good old days reminds me that on Friday afternoon last one of the Old School - known in his day as the sky-blue skipper of Carlton (he always played in a light blue jacket) - was conveyed to his last resting place, in the Melbourne Cemetery.
T'was to George Donaldson Kennedy old Fred. Blackham alluded in the Carlton Football Ode when he wrote -
"Our sky-blue skipper, George Kennedy
Brought many a club to its bended knee.
For he handled his men with tact and care,
And though rather slow was a skilful player."

"Ay di me! Cogitating on the fact that of all his old comrades only J. G. Gardiner, R. Robertson and J. McGibbon followed his remains to the grave, and that the customary tokens of regret were missing on the M.C.C. Ground on Saturday, there came back vividly to my remembrance the terrible pathos in the melancholy of Joe Jefferson's voice when, in the character of Rip Van Winkle, I heard him deliver the words - "And we are soon forgotten."
(Melbourne Punch p11)

1910 April 30
T. A. Reeves a long-time sports writer for the Daily Herald in Adelaide said;
"George Kennedy was one of the prime movers in the adoption of Victorian rules of football in this state."

1926 June 11 p14
Sport, the Adelaide newspaper wrote about the South Adelaide team of 1877 and wrote about each player;
"G. D. Kennedy (captain) an experienced and able general, has worked his team admirably; as a player he is getting on the old mark."

Further information about the Kennedy family can be found here.
http://family.incoll.org/familygroup.php?familyID=F7043&tree=LMIncell