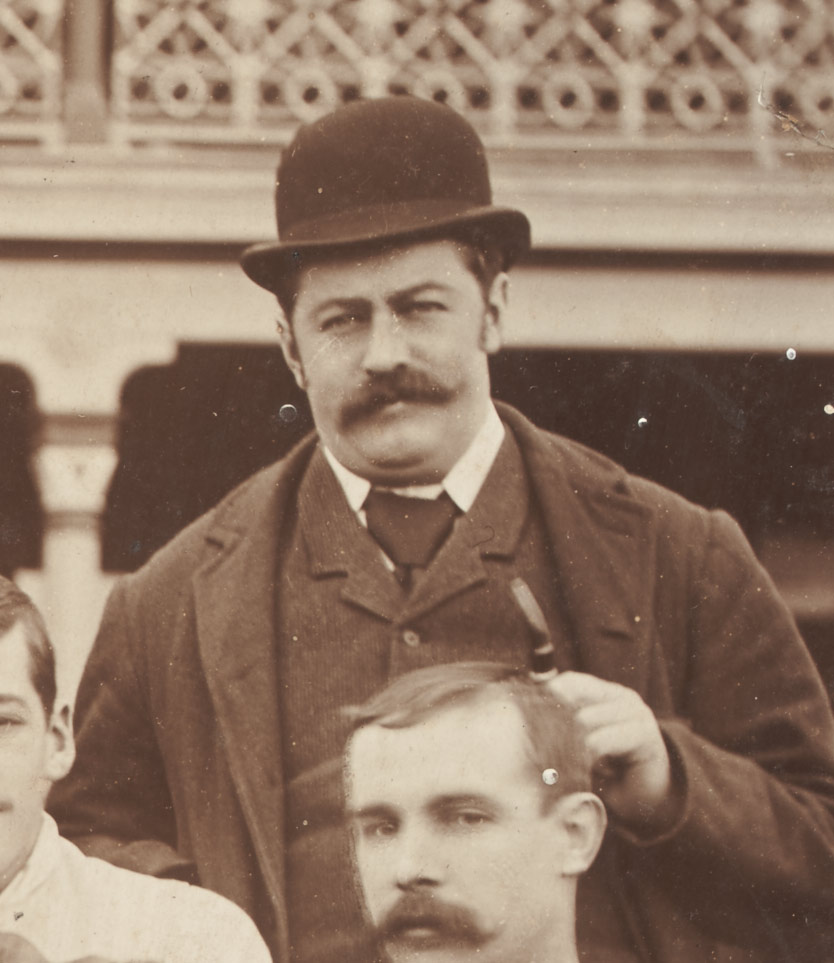 Parents, William and Margaret with their six children migrated to Melbourne 22 April 1855.

The photo (left) is from a July 4th 1896 picture of the Carlton Football Club. While not confirmed this individual is the only official in the photo with a family resemblance to William Ievers Jr and a resemblence to the bust of George Ievers referenced below/

George Hawkins Ievers joined his successful family real estate firm, started by his father, and in 1901 was elected to the Melbourne City Council. The real estate firm established in 1859 still survives today (now known as Kelly&Shiel) and is located just a short walk from the William Ievers drinking fountain in Argyle Square in Carlton. George was the third Ievers including his brother and father to hold the same seat at council for a total of 40 years. The Ievers family owned up to 100 houses in the Carlton area at times and their family home "Mount Ievers" was located at 521 Royal Parade before being demolished in 1975.
He was a justice of the peace and served on the boards of the Immigrant's Homes and the Women's Hospital.
He was on the committee of the Talbot Epileptic Colony and contributed to the Homoepathic Hospital.

His statue is at the corner of Gatehouse Street and The Avenue Parkville.

George Hawkins Ievers passed away in July 1921 (just five weeks after his wife of 47 years) five days after collapsing during a heated debate in the Melbourne council chambers about St Patrick's Day and Eight Hour processions. With no children the estate of George Ievers supported many hospitals, orphanages and catholic benevolent societies in the Carlton area for many decades each Christmas after his death.

At the Championship of Australia match against Port Adelaide in Adelaide in 1914, George Ievers had sent a greeting which was read out to the crowd in the after match gathering. In it George said he had been a member of the Carlton Football Club for 50 years. (Daily Herald Adelaide, October 05 p2) 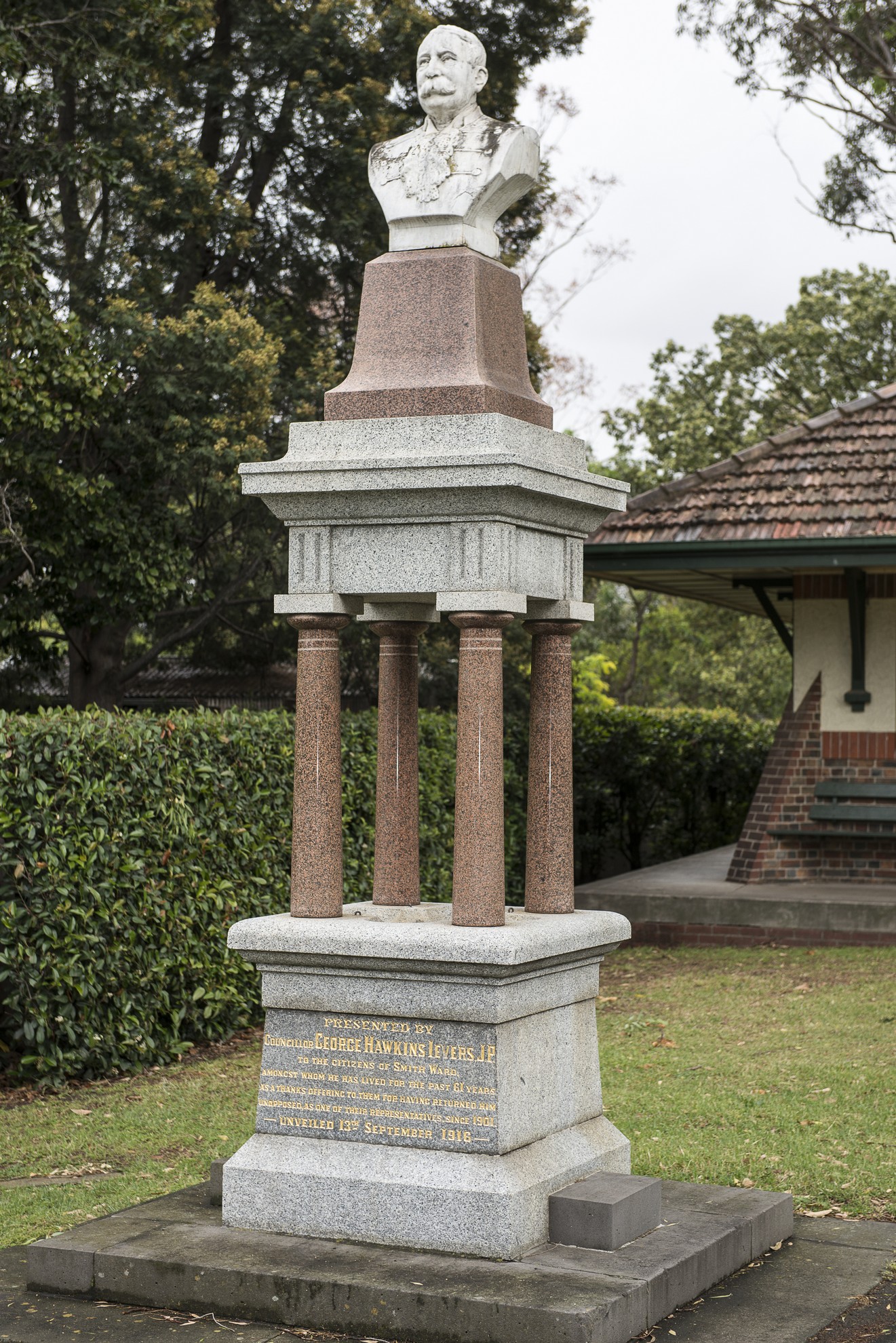 G. H. Ievers' Poem.
----------
OLD CARLTON - 1907 PREMIERS
This great year of Football is ended,
And old Carlton is still to the fore;
For our champions have nobly defended
Their title as Premiers once more.

Flynn and Elliott are both grand commanders,
They played for old Carlton rare games;
Both Elliott and Marchbank, 'spite slanders,
Bear still to all sportsmen fair names.

"Mallee" Johnson played football the fairest,
The champion this year he has been;
For his play all round was the rarest,
For his marking the grandest e'er seen.

Bruce and Kennedy's smart play will ever
Round football memories cling,
For their dash through the season so clever
Made them champions this year on the wing.

"Wee" McGregor was "great' all the season,
In the centre no one could oppose;
But Renfrey's sad rush was the reason
Why he lost the last match by a "nose".

"Hacken" Clark, Payne and Beck are terrors,
They played back with great heart and soul;
With Gillespie right back made no errors,
But nobly defended their goal.

Silver Caine's great punt took some stopping,
And Kelly, the star of the West,
With Harris and the game little Topping,
Make a quartette that rank with the best.

Jinks and Lang on the ball were splendid,
And both snapped smart goals as well;
Gotz and Hammond most ably defended,
And their dash in the ruck did tell.

Little Ingleman we greet with pleasure,
For his roving, his pluck and pace;
He proved to old Carlton a treasure,
For he took "Wee" McGregor's great place.

When misfortune o'ertook so gravely
Eli Elliott, and Marchbank as well,
The great breach was filled so bravely
By Jim Kennedy, young Williams and Snell.

When Vin Gardiner plays like his father,
Who oft captained the old Blues in the past,
In those days of great players-rather,
His fame, like Jack Gardiner's, will last.


1915 January 16
"Councillor G. H. Ievers saw the first intercolonial match between New South Wales and Victoria, in March 1856, on the Melbourne ground, and is still going strong. By the way, he has favoured me with a poetical effusion, commemorating the great achievements of the Carlton football team in carrying off the championship in 1914. The veteran has been a consistent and enthusiastic supporter of Carlton, both in cricket and football, right back to the days when Tom Gorman, Tom McCarthy, George Kennedy, and Bob McFarland played. This couplet from the old warrior seems rather to take my fancy: -
'Kind memories fragrant as the breath of flowers,
Add grace and sweetness to your Christmas hours.'
(Trove: Australasian p21)

1918 12th April, CFC General Meeting
Cr. G. levers presented thc club with a memento of the golden jubilee of his membership in the form of a framed photograph, and the words of six of his songs written and sung from 1878 to 1914. Mr. T.Skehan. accepted the presentation on behalf of the
club.
(Trove: The Age p10)