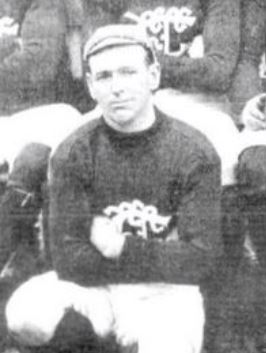 George Arthur Renwick who was born in the UK was a well-credentialed West Australian rover who had been on a wave of success prior to joining Carlton in 1909. After starting out at West Perth in the WAFA, he had transferred to Goldfields Football Association club Boulder City, where he was highly influential in their consecutive Premierships of 1907-’08. He had also represented WA with distinction at the 1908 Carnival in Melbourne, and it was probably then that Blues coach Jack Worrall convinced him to join the reigning VFL premiers.

However, although the Blues were being lauded for their triple Premiership success in 1906-07-08, Worrall was a coach under pressure. His rigid discipline did not sit well with some players, and there was widespread discontent over the issue of expenses (de facto player wages).

Therefore, when Renwick arrived at Princes Park, the club overall was neither happy nor completely united. The situation burst into the open prior to round one of the new season, when three senior players refused to take their place in the side to meet University, and Carlton went into the game without seven of the stars who had had claimed the 1908 flag. Renwick was one of three debutantes on that cold and wet afternoon at Princes Park, when the Students shocked the competition with their first - and only - victory over the Blues.

At that time Alex Lang was Carlton’s first-choice rover, so Renwick was asked to play as a wingman in the next two matches. In round 5, he was at half-forward when Lang’s four goals got the Blues home against Melbourne, but that turned out to be George’s last game. With dissent still bubbling and the situation far from what he had expected, George left Princes Park by mid-year, and returned to WA.

The Argus June 17 1909 p4 said, Permit Granted: George Renwick Carlton to Essendon (A)
Essendon A was the VFA team.

On July 29, 1910, Jack Worrall resigned his position as coach of the Carlton Football Club, but continued his role as Secretary until April of the following year. After a brief period as mentor of the VFL umpires, he was appointed coach at Essendon – and took them to successive flags in 1911-12.

George Renwick was born in Wandsworth, UK in 1886 and migrated to Australia with his family as a child. After spending much of his early life in WA, he later settled in Melbourne, where he passed away at the age of 58 on March 11, 1945.