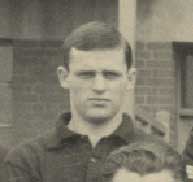 
Recruited from Paramount, Vincent with Carlton's Under 19s in which he played in the 1964 and 1965 seasons. Graham "Porky" Vincent progressed to play at least 8 Reserve games for 17 goals in 1966 before being named as 20th man in Carlton's only 'Night' game of 1966 against Hawthorn at the Lake Oval, Albert Park where he scored his 'Night' goal in his last game for Carlton. The 1966 Carlton Annual report said that Graham was under 18 years of age and was promoted to the Reserves after playing one Under 19's game.