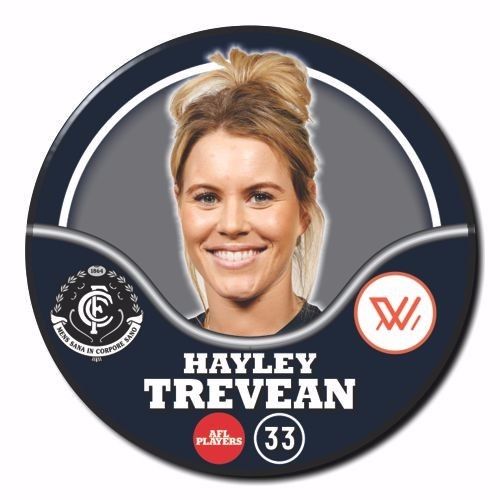 Hayley Trevean’s competitive streak is like no other, with her willingness to chase and tackle a true trademark of her game. A midsized forward who can also run through the midfield, Trevean will be an asset to Carlton’s line-up. “Hayley’s game sense is second to none and her ability to deny the opposition the ball is a win for us,” women’s senior coach Damien Keeping said. “Her positive attitude toward the game is very infectious, and I have no doubt her character will have a valuable affect on the development of our younger players. Trevean was recruited to the Blues as a free agent after the AFL Women’s draft.

Hayley Trevean was recruited by Carlton as a free agent following the 2016 AFL Women's draft. She made her debut in Carlton's final match of 2017, in round 7 against Brisbane at Ikon Park. She was subsequently delisted at season's end. Hayley played the 2018 season with the Geelong Cats VFLW team, and was listed in their inaugural AFLW team for 2019.