A top-class conscript from Collingwood... 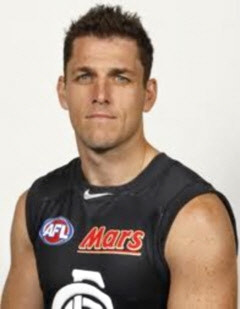 When Heath Scotland was traded from Collingwood to Carlton in 2003, former Magpie captain Tony Shaw was quoted as saying that it was a decision that “would probably bite Collingwood on the bum” – and he was right. In what turned out to be a very lop-sided deal, Carlton offered up draft pick number 35 for Scotland, and the Pies used it to recruit tall West Australian Brent Hall. Hall spent the next three seasons on the Magpies’ list and managed just one senior appearance, while Carlton picked up a classy defensive midfielder who would go on to play more than 200 games for the Navy Blues.

Originally from Darley, near Bacchus Marsh, Scotland first came under notice as a promising teenager with the Western Jets in the elite TAC Cup competition, and was recruited by Collingwood at selection number 44 in the 1998 National Draft. Courageous, and with all-round skills on both sides of his body, he made his senior debut with the Magpies in 1999, and by 2003 had racked up 53 games – including successive Grand Final losses to Brisbane in 2002-03.

But frustrated by what he saw as an overall lack of confidence in him by Collingwood’s coaching staff, Scotland requested a clearance after that second Grand Final defeat, and the Magpies reluctantly agreed to see what was on offer from rival clubs. Carlton stepped up with their bid, and the rest, as they say, is history. Desperately short of midfield depth after the heavy penalties imposed on the club in 2002 for salary cap breaches, Carlton welcomed Scotland with open arms, and gave him the responsibility his ability demanded.

Wearing the number 29 guernsey recently discarded by Simon Beaumont on his way to Hawthorn, Scotland made his debut for his new club against the Fremantle Dockers at Subiaco Oval in round 1, 2004. Playing on a wing alongside two other ‘retreads’ in Brett Johnson and David Clarke jnr, he quickly experienced a taste of things to come when the lack-lustre Blues were hammered by 47 points.

But from that day forward, Scotland was an on-field beacon. Consistent; persistent and brave, he became a ball-magnet as a defensive sweeper across half-back, providing stability and leadership as Carlton set about rebuilding by drafting some of the most promising young talent in the country. In every year between 2004 and 2012, Scotland finished among the Blues’ top ten possession-gatherers at the end of each season, including 2006, 2007 and 2012 when he topped the list.

In 2006 he scored more votes (10) than any other Carlton player in polling for the Brownlow Medal, and finished third in the voting for Carlton’s Best and Fairest award; the John Nicholls Medal. His follow-up year in 2007 was even better, as he remained one of the AFL's top ball-winners. Averaging over 26 disposals per game, he collected 20 or more possessions in all but three matches. In the last round of the season against Melbourne, he chalked-up a career-high 41 disposals, and topped off a milestone year when he finished only six points behind the winner of the 2007 John Nicholls Medal; Andrew Carrazzo. He also polled 12 Brownlow votes - the most by a Bluebagger since Anthony Koutoufides in 2000.

However, Heath’s remarkable injury-free run came to end late in 2008 when persistent groin soreness forced him into hospital for off-season surgery. Prior to missing the last game of the season he had featured in 77 consecutive matches, but when constant pain began to hamper his running, the only recourse was a trip to hospital. Four separate operations on his hips and abdomen followed, and the 28-year-old wasn’t able to attack the next pre-season with his customary verve.

Still, after a slow start to the year, he was back to near his best for the latter part of 2009 – just as the Blues emerged from the doldrums to finish in the top eight again after a five-year absence. Heath’s long-awaited first finals match for Carlton came six seasons and 123 games after he joined the club, and was played 1700 kilometres north of Princes Park on a Saturday night at the Gabba in Brisbane. The Blues were travelling like winners at three-quarter time in that clash, but lost their composure in the last few minutes to be beaten by seven points.

Back to his best in 2010, Scotland had yet another outstanding season, although for the second year running, his team was narrowly beaten in a thrilling Elimination Final. This time it was Sydney that triumphed, by 5 points - after another cracker of a contest at Homebush Stadium. Consistent and effective all year across half-back, Heath was ranked number one at Carlton for possessions and effective disposals.

In 2011, Scotland’s career reached new milestones and new heights. In the opening round of the season against Richmond, he brought up his 200th AFL game, and three weeks later celebrated his 150th match for Carlton when the Blues fought out a thrilling draw with Essendon. Then in September, the same two teams met in an Elimination Final, and Heath was dominant across half-back with 27 possessions and 11 marks in a huge ten-goal victory for the Blueboys. A week later, on the other side of the continent, Carlton lost a fiercely-contested Semi Final to the West Coast Eagles by just 3 points – our third single-figure point loss in a final in three seasons. 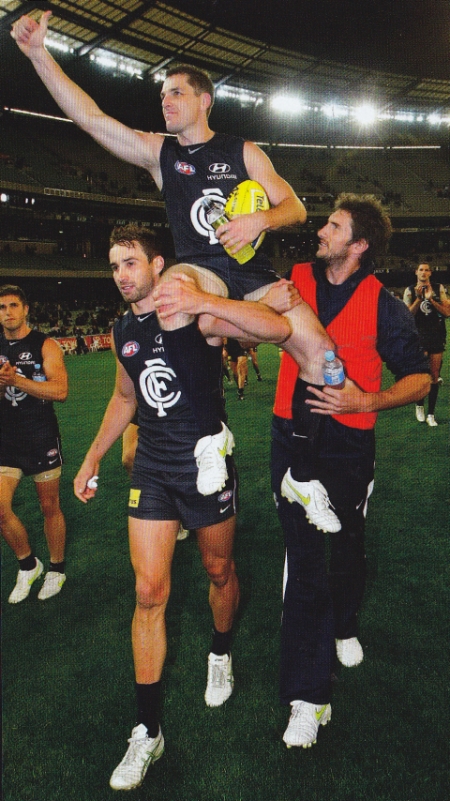 Although he turned 31 during the year, Scotland had enjoyed his best and most effective season to date. Having racked up top-three placings in four key statistics for the Blues (kicks, marks, handballs and effective disposals) he was short-listed for the All Australian team in August, and desperately unlucky to miss out. After finishing fourth in voting for the John Nicholls Medal (behind Marc Murphy, Chris Judd and Bryce Gibbs) he was an immensely popular winner of Carlton’s Best Clubman Award. And just to add to his glittering list of individual achievements, Heath was presented with Life Membership of the Carlton Football Club at the 2011 Annual General Meeting. Andrew Walker and Andrew Carrazzo were similarly honoured, for completing eight years of senior football for the Navy Blues.

Season 2012 began sensationally for Carlton, with crushing wins over Richmond, Brisbane and Collingwood propelling the Blues to the top of the ladder and early flag favouritism. Then a shock loss to Essendon in round 4 preceded a crippling run of injuries that wrecked the team’s finals prospects and ultimately led to the demise of coach Brett Ratten in early September. However, while Carlton supporters raged in frustration and his team-mates dropped like flies around him, Scotland once again was a model of consistency and professionalism. Regularly switched into unexpected roles during matches, he just kept getting hold of the football and setting up team-mates further afield.

Although a calf injury sidelined him for one match – an awful, mystifying loss to Port Adelaide in round 10, Heath finished the year as Carlton’s top possession winner, averaging 26 per match. He took more marks than any other Blue, dished off more handballs, and was ranked seventh overall in the competition for effective disposals. With these sorts of numbers, it was little surprise when he to won the 2012 John Nicholls Medal with 362 votes – edging out Eddie Betts (353) and club captain Chris Judd (334).

The sacking of Brett Ratten, and his replacement by former West Coast and Collingwood Premiership coach Mick Malthouse was one of the major football stories during the in the lead-up to 2013. Amid much conjecture, the relationship between Malthouse and Scotland was often discussed, because it was Malthouse who was senior coach when the Magpies had put Heath up for trade all those years ago.

However, any fears of a rift between the pair soon disappeared as Scotland embarked on another consistent season, and brought up two more career milestones on the way to yet another finals campaign. In late May at Docklands Stadium, Heath played his 250th AFL match when Carlton edged out Port Adelaide. Three weeks later, in front of an enormous crowd of 82,000 on a Friday night at the MCG, he notched up his 200th game for Carlton as the Blues went down to Essendon in a one-kick thriller.

When Carlton’s 2013 season ended in defeat by Sydney in a dour Semi Final, Scotland’s remarkable career had stretched over 14 years. Although his statistics remained impressive, the club opted to delist him, then redraft him as a mature-age rookie. It was a ploy that allowed the Blues to retain one of the team’s lynchpins, while securing an extra selection in the National Draft. “Scotto” was happy to comply with the club’s wishes, especially because a persistent ankle injury was causing mounting concern among Carlton’ medical staff.

Heath underwent surgery on the peroneal tendon in his left ankle late in 2013 (for the second time in twelve months) and the recovery process delayed his return to the field until round 4, 2014. He played the next three matches in succession, but by mid-May, increasing pain and a lack of flexibility in his ankle brought an end his notable career. Doctors had advised him that the problem was degenerative, and that it would not get any better under the training loads at AFL level. So Scotland faced up to the inevitable, and told the club that his playing career was over.

Carlton immediately placed him on the long-term injury list, allowing a rookie to be elevated before Heath was officially delisted at season’s end. At a press conference called to announce the decision, both coach Mick Malthouse and Football Operations Manager Andrew McKay were fulsome in their praise of a player who, in his own words, summed up his career like this; “In closing, I want to be remembered as a player who left it out there, who gave it his all every week, and whose teammates knew he gave it his best effort. Personally, I know I gave it everything. I’m comfortable knowing that I played for the Carlton jumper.” Malthouse said, “He didn't get what he wanted with a premiership, but he can be very, very proud of his career. He's achieved far more than most players ever will.”

As an additional mark of respect, Carlton also announced that Scotland would be given a lap of honour prior to the Blues’ next game, against Adelaide at the MCG on Sunday, May 25.

Scotland would play a few early season games for the Northern Blues in 2015 but headed to Doncaster where he would play the remainder of the 2015 season as well as the 2016 season in the Eastern Football League.

In 2017 Scotland was appointed coach for Darley in the Ballarat League, the club he played for as a junior. Scotland kicked two goals and was a standout player for the Darley 'Devils" when they defeated Bacchus Marsh by 50 points in the 2017 Grand Final. Scotland would leave Darley at the end of he 2019 and to take up a development role with AFL club North Melbourne for the 2020 season. Scotland would then move to WRFL club Sunshine for the 2021 season as the Senior Coach.