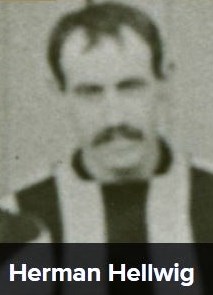 H. Hellwig/Helwig transferred to Carlton from North Melbourne in 1895.


Above; Hellwig at Collingwood in 1897
Image; Courtesy of collingwoodforever web site

1895 Round 1, May 11
Hellwig is named in the 25 man squad to play Geelong at Geelong.
Herman Otto Hellwig debuted for his only game for the Blues, he played on the half back flank.

Herman Hellwig later transferred to Collingwood and played 21 VFL games for 3 goals between 1897 - 1899.

"German Cemetery, Northcote Victoria
In May 1861 four residents, August Schwaebsch, Albert Fritsche, Moritz Heiner and Edward Hellwig purchased one acre of land for use as a cemetery. The land was situated in Separation Street in Northcote Victoria (known at the time as German Lane.)
Ironically only one of the four founding members, Moritz Heiner, is buried in the cemetery.
The cemetery was taken over by Northcote Council in the 1920s. By this time the cemetery had been closed except for holders of Rights of Burial. The occasional burial was still taking place up until 1971."
Info courtesy, Old Time Photos Of Yesteryear
https://www.facebook.com/groups/672164369508943/

Was Edward Hellwig a relative?