The Referee newspaper (September 30 1914) in it's article on Carlton's premiership victory over South Melbourne said;
"J. E. Clinton assumed the secretarial reins early in the season, and the success of the side is largely due to his efforts. He is popular with players and supporters, and genial and courteous towards all with whom he has dealings."

"An 'Addendum' to the report refers eulogistically to Secretary Mr. J. E. Clinton - 'The floating of the pennant on our ground for season 1914 was due to his vigilance in securing players to achieve this great object. Your committee feel that the best thanks of members should be placed to this report for services rendered by Mr. J. E. Clinton as secretary."
(Sporting Judge March 20 1915)

J. E. Clinton acted as team manager, of the Carlton side that played Port Adelaide in Adelaide, October 1914.

Writing about a proposed amalgamation of Rugby and Australian Football the Sydney newspaper The Referee spoke to Carlton secretary J. E. Clinton for his views.
"In a conversation with Mr. J. E. Clinton, hon. secretary of the Carlton F. C., he informed me that his club was not inclined to the new scheme. The Australian Rules, in his opinion, are excellent, though he admits games with N. S. Wales would be a big advantage. He, of course, judges Rugby largely upon what he saw in the England - N. S. Wales contest - which was little more than a riot. The few passing bursts that he enjoyed, but the monotonous scrummaging spoiled the game as a spectacle. One fears this exhibition will retard amalgamation, and also that a new body with the old code will beat the old body with a new code."

From the Argus, October 2nd, 1918
Mr. James Edward Clinton, secretary of the Carlton Football Club for seven years, died yesterday morning, in the Melbourne Hospital, after a short illness. He had represented the Carlton club at various times on the Victorian Football League. As a young man he was well known as a racing cyclist. He leaves a widow, but no family*. The funeral will take place at the Melbourne General Cemetery this afternoon.
The Bendigo Advertiser (Oct 02 p5) said for several years he was a well known bicycle agent in Bendigo. He was about 46 years old and had an adopted daughter*

The death notice in The Age (Oct 02) said he died at his mother's home in Ivanhoe and that he was 46 years old. Husband of Rachael and foster father of Elvie Clinton 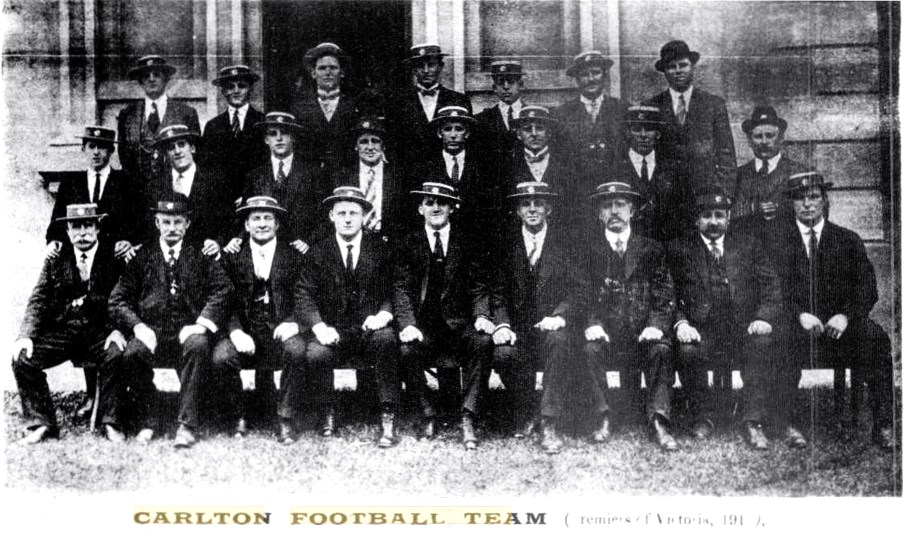 The Carlton team in Adelaide, October 1914.
24 people pictured. Not all the 20 players are are shown in this photograph, perhaps about 15, if any? There are many officials.
James Clinton may be front row, centre, fifth from left
Possibly Paddy O'Brien to our left of Clinton. John Gardiner front row second from right? Norman Clark back row far right? J. Barr front row far left?
Image : Trove; Sport (SA) October 09 p4