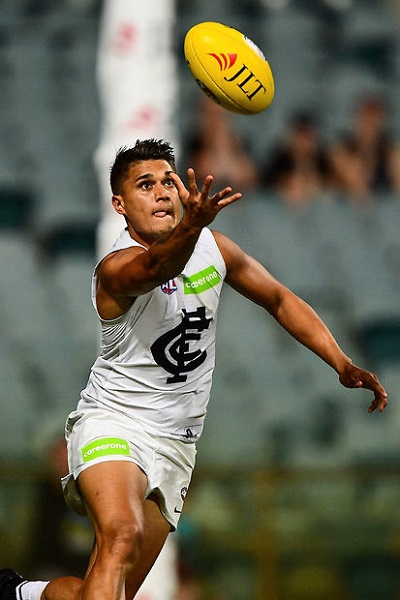 West Australian Jarrod Pickett created real excitement when he was drafted by the GWS Giants at number 4 in the 2014 National Draft. Skilled and lightning fast, he had provided some of the most electrifying moments in that year’s Under-18 National Championships, in particular when he kicked three extraordinary goals amid 22 possessions for the Sandgropers in their clash against South Australia.

Later that same year Pickett played senior football in the WAFL for South Fremantle, where he was soon being compared to another prodigious talent of aboriginal heritage; 3-time Hawthorn Premiership wingman Bradley Hill. Sure enough, Jarrod was snapped up early in the draft as predicted, but all did not go to plan in his first season of AFL football. Although he began regularly kicking bags of 2,3 and 4 goals for the Giants’ NEAFL team, the spread and depth of talent at GWS stymied his ambitions.

Early in 2016, Pickett’s hopes were raised when he was selected for a pre-season trial match against the Sydney Swans. A month later however, he suffered a serious foot fracture in an NEAFL game and couldn’t play again all season. Meanwhile, former GWS List Manager Stephen Silvagni – who had engineered Pickett’s recruitment in the first place – was now filling the same role at his original club Carlton.

Ahead of the 2016 Trade Period, Silvagni apparently initiated discussions between the two clubs that culminated in Pickett leaving GWS to join the Navy Blues. In a package deal that saw Carlton give up their first round draft pick in 2017 – as well as a raft of others in 2016 – Pickett and versatile defender Caleb Marchbank found a new home and new beginnings at Princes Park. 10 games in his first year raised hopes, but a cracked wrist cost him much of 2018. And then, heading in to a 2019 pre-season, Pickett would rupture a patella tendon in his knee, requiring many months of rehab.

Just after the midway point of the 2019 season Jarrod Pickett advised the club that he wanted to head back home to WA. The Club and Pickett had held ongoing discussions over a period of time regarding his motivation to continue playing the game at the highest level. It was then determined that it would be in the best interests of both the Club and Pickett to part ways. The Club agreed to continue to support Pickett during his rehabilitation from the knee injury he sustained late last year and will assist him with the immediate transition back home to Western Australia to be closer to his family. “Both parties have made the decision to part ways now in order to allow Jarrod to get back home to his family,” Carlton GM of List Management and Strategy Stephen Silvagni said. “We will provide Jarrod with the necessary assistance he requires to begin the next chapter of his life and we wish him all the best for the future.”