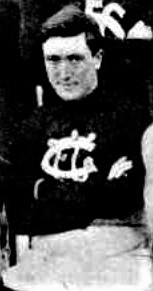 One of 6 Stewarts to represent Carlton, but the one who played the equal least games together with George, Jim Stewart played 2 games in Navy Blue, debuting in 1912. Jim kicked 2 goals in his 2 games.

Stewart had played at North Melbourne VFA prior to St Kilda.

"Mr. James F. Stewart, one time prominent Carlton footballer, is under treatment for an illness in a private hospital. He recently returned from a tour of the world, which he took for the benefit of his health."
(Herald March 16 1928 p5)