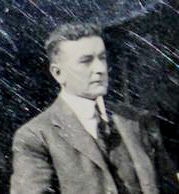 
James Munroe ‘Jimmy’ Aitken, born in Sebastopol, was captain of the first team to represent the Carlton Football Club in VFL competition, and is therefore recognised as Player Number One in the long and varied list of individuals to have worn the Navy Blue. Sadly, there is much we do not know about him, apart from the bare facts of his playing career, and his seemingly acrimonious defection to Melbourne in just his second season.

When Carlton joined seven other dissident VFA clubs and formed the Victorian Football League in 1897, Jimmy Aitken was already an established star at Princes Park (Carlton Vice Captain in 1896), so it didn’t surprise when the hard-working centreman replaced incumbent Tom Blake as captain. Defender Ernie Walton was appointed vice-captain, while Blake played on as the team’s senior ruckman.

Jimmy took up his usual place in the middle of the field on that momentous day in May, 1897 when Carlton and Fitzroy clashed at Brunswick Street Oval for the first time as VFL rivals. The Maroons deservedly ran out 33-point winners, giving the Blues a graphic preview of the remainder of their season. As the year progressed, losses mounted and frustration deepened. Jimmy did all he could to lift his flagging team, playing all over the field, from centre half-forward to a half-back flank. Ultimately, however, Carlton’s only two wins for the season came at the expense of a hapless St Kilda team that finished up with no wins, the wooden spoon and a percentage of 29.1.

Perhaps the sole high point of the year for Jimmy came in Carlton’s second defeat of St Kilda at Princes Park in late July. He played on a half-forward flank in a spiteful game, and kicked all three of his career goals while leading his side to a comfortable and much-needed victory.

More than 100 years after the event, it is not hard to imagine that discontent and vindictiveness would have soon surfaced at Princes Park in the wake of that first foray into the big league, or that Jimmy Aitken may have been wounded by criticism of his team or his leadership. What is clear, is that Jimmy’s departure from Carlton was swift and unexpected. He retained his captaincy of the Blues for 1898, and began the new season with an encouraging win over South Melbourne at Princes Park. But the following week at the MCG, Melbourne thrashed Carlton by ten goals.

Some time and somewhere after that huge loss, words were apparently exchanged and a bridge or two came crashing down. We don’t know if Jimmy jumped or was pushed, but only a week or so after his 26th birthday, he walked out of Princes Park and seemingly never returned. Later in that season, he was invited to make a return to the field with Melbourne. He played another four matches with the Fuchsias, and retired from senior football at year’s end.

"There has been an extraordinary event in the Carlton circle. At the beginning of the season Aitken was elected captain by 12 votes to 8 - rather a good majority. He had to battle hard to get in the team against South Melbourne and Melbourne. After this he was left out of the team, owing to want of form. Walton has been elected captain, and the committee came to the decision that they could not play Aitken, because of his want of form. He applied for a clearance, which was given him, and now has received his permit to play for Melbourne, for whom, I predict, he will show fine football before long." (Herald Friday June 03 1898 p3)

1891 September 12
Jimmy Aitken made his debut for Carlton at the age of 19 years 120 days.
Carlton played Melbourne in the drawn game on the Warehouseman's Ground. (now the Albert Ground, St. Kilda Road)
The Australasian said "a recruit of sterling promise."

1893 July 15
Carton played Fitzroy on the M.C.G.
Monday's Argus match review said;
"On the Carlton side no one pleased the crowd half so much as little Aitken, a player with whose methods the spectators whether their neck ties were cardinal or bird's-eye, were always in sympathy. He plays so neatly, and with his whole heart and soul in the game, that one cannot help admiring him.

1894 In a Carlton side that was weak all round was one of their best players.

1895 Was one of the outstanding players for the year.

1896 J. M. Aitken received a two week suspension for misconduct using foul language against umpire Carter at the St.Kilda match on June 13.
The V.F.A. tribunal found him guilty on July 2.
He wrote a letter to The Argus stating that he was prevented by the V.F.A. from using witnesses who would have proved his innocence.
Aitken, O'Cock, Balharry and Ashton were all suspended by the tribunal from the charges arising from this match.

1896 Formed the nucleus of a fine team in the club, and a player like him is not picked up every year.
(Centenary Souvenir of Carlton Football Club: p.21)