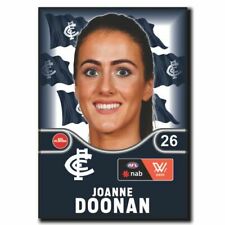 Joanne Doonan joined Carlton as its second AFLW rookie for the 2020 season. Doonan is the first ever Irish-born AFLW signing for the Blues and joined the Club from the Fermanagh Gaelic Athletic Association Ladies team, where she is currently the captain. The 25-year-old has enjoyed a decorated Gaelic football career, which has featured two Gaelic Life Club All Star nominations, an All-Ireland Junior Championship, an O’Connor Cup Shield winner where Doonan was awarded player of the match.

Doonan headed back home during the 2020 season. At the end of the season Doonan departed after the one season at Ikon Park, where she played two games as an international rookie signing.

Blues confirm four AFLW list changes
The Carlton Football Club has informed Joanne Doonan, Emerson Woods, Katie Harrison and Sharnie Whiting that they will not be offered new contracts for next season. Doonan departs after one season at Ikon Park, where she played two games as an international rookie signing. Woods played one game for the Blues after being selected at pick No.38 in the 2018 NAB AFLW draft. The childhood blue achieved her lifelong dream in Round 5, 2019 when she pulled on the Navy Blue jumper in a win over Collingwood.
Whiting and Harrison also depart after one season. Despite not making an AFLW appearance, the pair were valued members of the playing group. Harrison was a rookie selection after making the brave decision to play Australian rules football after earning a place on the Australian Rugby Sevens side as a development player.
Carlton General Manager of Women’s Football Ash Brown thanked all four players for their commitment to the Club.
“On behalf of the entire playing group, coaches and players, we would like to thank Joanne, Emerson, Katie and Sharnie for their contributions to our club,” Brown said. “They turned up and worked hard whenever they walked through the doors at Ikon Park. In addition to that, they were great people to be around who positively influenced the culture of our program. “We thank them for their dedication to our AFLW program and wish them nothing but the best for the future.” – Carlton Media.

Janne Doonan returned to Ireland after her delisting, but came back to Australia as the COVID-19 pandemic borders eased and played for the Bombers VFLW team in 2022. Doonan was added to the Essendon's inaugural AFLW list. Doonan was part of the Bombers’ VFLW Premiership team.