Askew was originally from the All Blacks Football Club from the Tatong-Thoona District Football League in the Benalla area.
Joe Askew played in the Carlton Reserves 1937-1939.
He did not play a senior game.

The Victorian Railways in 1937 had a football competition. The Flinders Street team played Melbourne Goods for the premiership on Ransford Oval Royal Park September 01. A player named J. Askew was selected in the Flinders Street side.

At the outbreak of WW2 Joe enlisted in the A.I.F. He was alongside fellow Carlton player Jim Park when Lt. Park (2/6 Battalion) was killed in action in New Guinea during a firefight defending Wau airfield on February 09 1943.
Askew served for nearly six years, discharged in late 1945 and played with Glenelg (SA) early in 1946.

The Benalla Ensign (June 21 p5 1946);
"Auguring well for the interest and support of the Benalla people, Joe Askew, was appointed playing coach of the Benalla Football Club this week. A local boy, Joe's football career is well known to people of Benalla. He gave Carlton good service prior to enlisting in the A.I.F., and this year has done well in the centre for the Glenelg club in the Adelaide League."
Benalla had a temporary coach until the mid year appointment of Askew.

The All Blacks Football Club was invited to amalgamate with the Benalla Football Club early in 1946.
Benalla had a good season and just failed in their first final, but in 1947 Joe Askew was replaced as the Benalla coach by Bob Chitty

There was a Joseph Michael Askew (VX38684) born 18 February 1916 at Hastings Vic. Residing at South Yarra, he enlisted at Royal Park, August 26 1940 in the 2/6th Battalion. Discharged October 16 1945. (World War Two Nominal Role)
If this is the same person then he is approx 4 years older than previously thought, however the 2/6 Battalion matches. 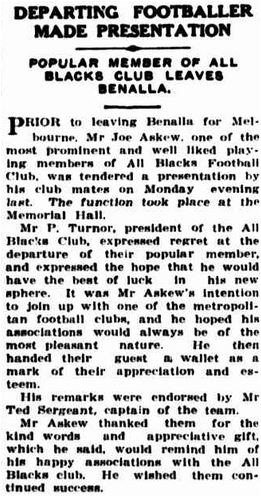 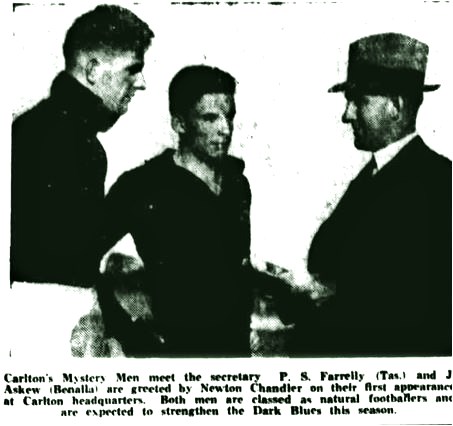