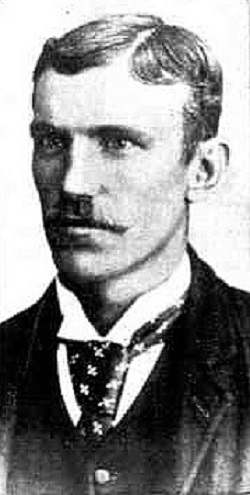 An ageless ruckman who captained Carlton into the Blues’ first VFL Grand Final in 1904, Joe McShane was one of six brothers who played senior football with Geelong. After joining his younger sibling Henry at Princes Park in 1902, he was appointed captain of the Blues mid-season, and led Carlton for almost three years under the coaching of Jack Worrall.

When Geelong joined the VFL as a foundation club in 1897, three of the McShane brothers were already established stars of their team. Jim and Joe were ruckmen-forwards with a reputation for playing hard, uncompromising football, while Henry was a skilful, lightly-built utility. The three older boys, Jack, Phil and Tom, had all previously pulled on the blue and white hoops of the Pivotonians, too. Jack had been vice-captain of Geelong’s undefeated 1886 VFA Premiership side, but sadly, passed away in 1887. Phil was a talented forward who had demonstrated his ability with Carlton, Fitzroy and Essendon before returning to Geelong to be the VFA’s leading goal-kicker in 1886.

In 1899, Henry McShane left Geelong and joined Carlton. It is probable that the struggling Blues lured Henry to Princes Park for greater financial reward, and got good value for their investment. A reliable, versatile player who was captain of the Blues for ten matches in his first season, he was consistently good throughout his 82-game career.

In Henry's absence, his older brother Joe became a fine on-field leader at Geelong, where he won their Best and Fairest award in 1897, and represented Victoria in 1899. Three years later, Joe was persuaded to join Henry at Princes Park – coinciding with the appointment of former Fitzroy champion Jack Worrall as Secretary of the Carlton Football Club. In fact, Worrall was to become the game’s first full-time coach, at a pivotal moment in the Navy Blues’ history.

Although Joe McShane had already turned 33 by the time he played his first match for Carlton, Worrall knew the value of experience. Joe was appointed captain of the Blues for Round 12, 1902, and responded as his coach expected. Tough and determined, he led by example, and was a fierce protector of his team-mates.

After languishing at the foot of the eight-team VFL ladder for five years, Carlton began their climb to glory under Worrall and McShane in 1903. From sixth in 1902, the Blues swept into the finals for the first time ever in 1903, but lost a cliff-hanger Semi-Final to Collingwood by four points.

In 1904, Carlton improved further to finish second after the home and away rounds, and showed that form was no fluke by edging out Essendon to celebrate the clubs’ first-ever victory in a Semi Final in a cracker contest played at Collingwood’s home ground, Victoria Park. The Blues won by three points, after Essendon’s star forward Jack McKenzie missed a crucial shot on goal in the last minutes of the match.

That long-awaited victory took Carlton into a Grand Final clash with minor premiers and hot favourites Fitzroy at the MCG. The plucky Blues – with Joe and Henry McShane prominent at half-forward – served it up to the ‘Roys and were a point in front at half time, before Fitzroy steadied and dominated the second half to win by four goals.

Both McShane boys retired after that high point in their football careers - Joe aged 35, and Henry just a few months short of his thirty-second birthday. Although their playing days ended in disappointment, later they must have been justifiably proud of the part they played in laying the foundations for Carlton’s glorious 1906, ’07 and ’08 Premiership treble.

After returning home to Geelong, Joe McShane passed away on the 26th July 1950, aged 81.

1905
"Joe McShane has literally run off his legs by football. The ex-captain of the Carlton team, had intended to play again this year, but his legs, not being the equal to the strain, he has reluctantly decided to retire from the game.
What a record his has been! For seventeen years he has been in the ruck, bustling and being bustled, but withal playing magnificently. There are men who have played longer than Joseph, but none who have covered more ground in pursuit of the bounding bladder." (Herald May 05 p4)

1927
"An interesting personality at the Carlton ground last Saturday was Joe McShane, a great player in his day, and who played for both Geelong and Carlton. McShane was a fine mark, was the vigorous type of player - a real match winner. He was a big strong man, as befitted a follower in the strenuous times of his youth, and with playing for Geelong had Henry Young as a henchman in the pack. They were two mighty men of valour against whom but few followers would stand up against.
McShane captained Carlton when on its rise to fame, and for that reason deserves well of the old club, whose colours he led to victory in many a hard-fought struggle. When I saw him he was looking for Jack Baker, another veteran who played for both teams, but whether he was successful in his search I know not."
(Australasian 13 August p37 1927)