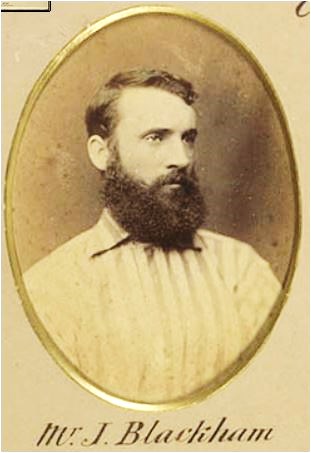 1880 Blackham scored two goals for the Carlton Reserves/Second Twenty during the season.
(The Footballer 1880. p65)

Could this player be the famous cricketer-wicketkeeper John McCarthy Blackham,
(DOB: May 11 1854, North Fitzroy - DOD: December 28 1932, Flinders Lane Melbourne) who first played for the Carlton Cricket Club as a 15 yo?
The Carlton Cricket Club (July 1871) in its annual report for the 1870 - 71 season mentioned "....the appearance of the two boy colts, John Blackham and Thomas Horan ...." (Australasian July 22)

April 2019, Blueseum has been informed that John Blackham was playing cricket in England during 1880. He was on tour with the Australian team.
It is believed that he was there in May of that year. Back then it was a 10 week voyage to sail to the UK.
So perhaps it was another Blackham that played in the Second Twenty that year.

Andy McHarg in an interview with the Sydney sports newspaper The Referee in March 1915 recalled a match in 1868 in which Carlton played football against the British Army side the 14th. Regiment at Royal Park. Andrew recited verses of a poem about this match which was written by Jack Blackham, father of the famous wicketkeeper.
See 1868 August 01