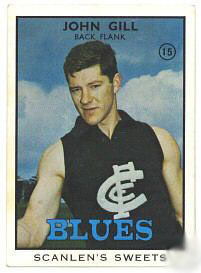 John Gill was a player with an impressive football pedigree. The nephew of Frank Gill (Carlton’s champion full-back of the 1930’s), he was also the older brother of 1968 and 1970 Carlton Premiership player Barry Gill. After completing an impressive debut season in 1962, John should have gone on to play 100 games or more for the Navy Blues - had injury not brought a premature end to his VFL career at the age of only 25.

Gill was recruited from Casterton in Western Victoria, and wore guernsey number 12 for the Navy Blues for the first time at senior level in a landmark clash against Geelong at Princes Park in round one, 1962. The Cats’ boom WA recruit, Graham ‘Polly’ Farmer, also made his long-awaited debut that afternoon, only to wreck a knee in the first few minutes of the game. However, Farmer stayed on the field, and limped to a forward pocket, where he kicked four goals and led his team to a big win over Carlton by 39 points.

Gill played out that match on a half-forward flank, where his determination and straight-ahead style stood out. From then on, he held his place in the side right through the year, as the Navy Blues battled through to fourth place on the ladder. Three desperately hard-fought finals ensued; a two-point Semi Final win over Melbourne, a famous draw with Geelong in the Preliminary Final, and a dramatic five-point victory over the Cats in a highly-controversial replay. Not surprisingly, those three epics took their toll, and on Grand Final day the valiant Navy Blues were never really in contention against Essendon, losing by six goals. Gill finished his maiden season with 19 matches and twelve goals to his credit, and was a popular winner of Carlton’s Best First Year Player award.

From the highs of 1962, the Navy Blues fell into a slump over the following three seasons, before the coaching coup of the century brought former Melbourne champion Ron Barassi to Princes Park in the summer of 1964-’65. Earlier that same year, John and Barry Gill were reunited on the football field when they played together for the first time as Blues, against Hawthorn at Glenferrie Oval in round 2.

Under Barassi, John Gill developed into a tenacious, hard-working half-back. He was encouraged to seize the initiative, and became adept at wrong-footing opponents by often playing on as soon as he took one of his strong marks. By 1967, Carlton was once again looming as a finals contender, and Johnny had become an asset in defence or attack. Then disaster struck in the opening game of the season, when he tore a knee cartilage in Carlton’s huge win over Fitzroy at Princes Park.

Sidelined for a month, John eventually returned to the side for a handful of games with his knee heavily strapped. But his customary zip was missing, and another knock on the same leg in round 13 against Hawthorn did further damage. Over the next six months, while Barassi’s Blues climbed back toward the top of the VFL ladder, Gill was under constant medical treatment. Sadly, it was all in vain, and on doctor’s advice he retired at the end of that year.