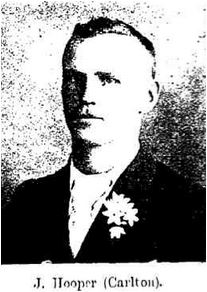 John William "Bobadil" Hooper was a wingman from the West Melbourne (VFA) club, who played 15 games for Carlton in season 1899. He made his debut in round one of that year, against South Melbourne at the Lake Oval. South were far too good for the Blues and won by 55 points.

It was a period of little success for Carlton, so a high turnover of players was inevitable. On that particular day, Hooper was one of nine debutantes. Apart from this scant information, little else about him is known.

The origin of his quaint nickname lies in the writings of Ben Jonson's Every Man in his Humour, where the character referred to as Bobadil was a swaggering boaster. The nickname is referred to several times in the writing of the time including in page 7 of The Age, 22nd May 1899 "Leahy's speed is well known, and Hooper, who is called "Bobadil" by his club mates, is also very fast".

Meaning of nickname
Date of Birth