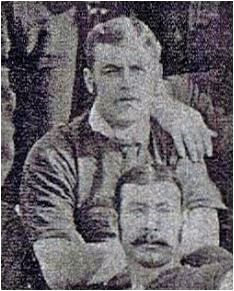 Descendants of John "Jock" William Davidson Martin (McKenzie) have been in contact with Blueseum.
"Jock" was born with the surname McKenzie but was brought up from a very young age by the Martin family.
When he married in 1890, his wife Elizabeth suggested the surname be changed to McKenzie.


The excellent series, "Origins of Australian Football" Vol. 2 has a T. Martin listed for 1883 & 1884, no mention of J. Martin.
However the 1884 Carlton AGM mentions a J. Martin on the Second Twenty committee and the 1884 team photo mentions J. Martin.
He may be J. T. Martin but known by his middle name in some match reports.
Mark Pennings' final installment of "Origins of Australian Football" Vol. 5 will be released in 2017 it will now have J. Martin listed.

Above; J. Martin from the 1884 Carlton team photo taken in Adelaide. The player in front is M. Slattery.

1883 May 24 Queen's Birthday
Martin named in the Second Twenty squad of 20 players to play Malmsbury at Malmsbury, near Kyneton. Carlton won 6 - 0

1883 May 26
Martin was named in the Carlton Second Twenty/Reserves team squad of 20 to play a Fitzroy team on Princes Oval.

1883 June 16
Martin mentioned as one of the Carlton Second Twenty's better players in the win against Britannia at Victoria Park. Carlton won 1.9 - 0.4

1883 July 14
Martin mentioned as one of the Carlton Second Twenty's better players in the win against South Yarra at the St.Kilda Football Ground.
Carlton lost 1.6 - 4.12

1883 July 21
Martin mentioned as one of the Carlton Second Twenty's better players in the win against Essendon at Princes Oval.
Carlton won 2.15 - 0.5

A leading player in the 1883 season.
(Centenary Souvenir of Carlton Football Club p16)


"A THING OF THREADS AND PATCHES"

Martin made his senior debut and was named as one of the best players in Carlton's remarkable win over Essendon.
This was when Carlton sacked a few rowdy players after a club trip to Maryborough and many of their team mates refused to play unless the players were reinstated. Carlton refused the players' demands and cobbled together a mixed firsts and reserves team and bought back retired captain, now Victorian parliamentarian, Jack Gardiner MLA for this game. Carlton won the match 3.11 - 1.10.
This team was described as "a thing of threads and patches" in The Carlton Story, H. Buggy and H. Bell. (p55)

1883 September 01
Carlton vs Melbourne at Brunswick Street.
".... but next to Donovan, little Martin, who was conspicuous in his light blue uniform, deserves first mention, playing as well as he had done against Essendon - which is saying a good deal." (Leader September 08 p20)

1883 September 15
Carlton played Hotham on Princes Oval
Martin was named in the team squad and in match reports.
Carlton won 6.8 - 3.6

1883 September 22
Martin was mentioned in match reports in the game against Geelong at the Corio Cricket Ground.
Carlton lost 2.9 - 7.18

1883 September 29
Martin played in the final game of the season against Melbourne at Princes Oval.
Carlton won 2.14 - 0.6

1884 Was presented with a medal for his play for the Reserves/Second Twenty, at the Carlton general meeting held Friday 4th April.
Martin was on the Second Twenty committee. (Argus April 05 p10)

J. Martin was a member of the Carlton team of 21 players who toured Adelaide. He appears in the 1884 Carlton Football Club team photo taken in Adelaide. 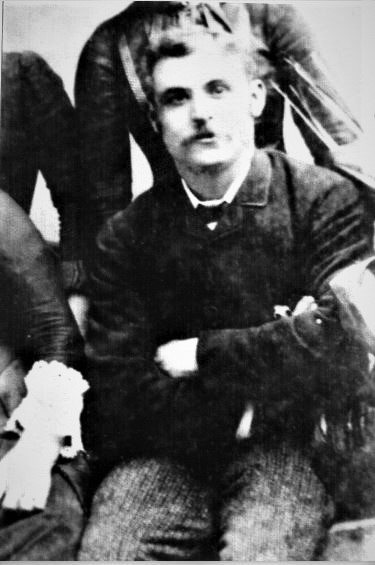