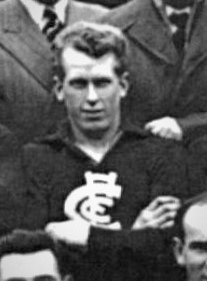 Although he appeared in only three senior matches for the Blues (and all of them ended in defeat) Johnny Blake was a loyal and popular clubman who also played in four lower-grade Premiership teams for the Blues during his six seasons at Princes Park.

Blake joined Carlton’s Under 19 squad from the junior ranks at VFA club Northcote, and celebrated immediate success with consecutive Premierships in 1948 and 1949. He moved up to Reserve grade in 1950, and in July of the following year, was called into Carlton’s senior team for the round 13 match against Footscray at Princes Park. He took up a half-forward flank for his debut, but was rarely sighted as the Blues squandered many chances in front of goal and lost by three points.

Johnny was dropped to the bench for the following two matches (surprise defeats on each occasion, by Richmond and Geelong, respectively) before being sent back to the Reserves as the ’51 finals beckoned. On Grand Final day, he played at full-forward in the curtain-raiser game, when his team beat Essendon by 12 points to claim Carlton’s first Reserves flag for 23 years. Off the field, Blake was even more successful in his chosen trade, winning a gold medal as Victoria’s apprentice plumber of the year. He was in the employ of the Victorian Railways when he won the award in 1951.

Johnny remained at Carlton as a stalwart of the seconds for another two seasons, reaping further reward in 1953 with another Reserve-grade Premiership victory over the Bombers on Grand Final day. He finished up at the end of that year, departing Princes Park with many friends and a wealth of stories.

Some years later, Johnny’s son Clete played with Fitzroy Under 19's, but succumbed to injury and retired at a young age. He would also follow in his father's footsteps and become a plumber.

1992 - Ex Blue Reserves Player Matt Scully about to coach Castlemaine to a flag.