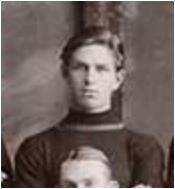 A handy all-rounder who played both his first and his last senior games against Richmond at the Punt Road Oval, Johnny Davies came to Princes Park from our amateur affiliate club, Carlton District, in 1922 and had also attended Scotch College. He spent three seasons with the Blues, playing a variety of roles in guernsey number 30.

Davies managed ten games in his debut year – all played at either half-back or in a back pocket. But he missed out on selection in the seniors after round 17, and wasn’t part of the side that went down to Essendon by five points in the first Semi Final. That loss proved to be the Blues’ last finals appearance for five years, and heralded the start of a bleak period for the club.

Champion forward Horrie Clover was appointed captain-coach of the Blues in 1923, and while he tried valiantly to inspire his team, the club fell out of contention early and wound up seventh on the 9-team ladder. Clover experimented with Davies as a half-forward, forward pocket and follower, but by seasons end had sent him back to the last line of defence.

Former Fitzroy champion Percy Parratt took over the coaching reins from Clover in 1924, without any greater success. Again switching between in attack and defence, Davies played 11 more games – including his farewell match against Richmond at Punt Road in the last round of the season. He finished with a perfectly-balanced record of 15 wins, 15 losses and two draws in his 32 games for the Blues, and his last appearance was the 500th VFL game played by the Carlton Football Club.

He returned to the Carlton seconds grade where he was later made a life Member of the Carlton 2nd 18 and returned to senior football five years after playing his last senior game for Carlton at Fitzroy. Although he was approaching the age of 30 by then, the Maroons took a punt on him, including him in their team that was beaten by 24 points by South Melbourne at Brunswick Street in round 10, 1929.

Davies retired after that one last outing.

Davies was born in Brunswick and his full name was John William Matthew Davies, he passed away on his birthday in 1967, at the age of 67. According to his family while he was playing football he was known as Johnny "Sox" Davies.