Centre stage in a celebrated moment.... 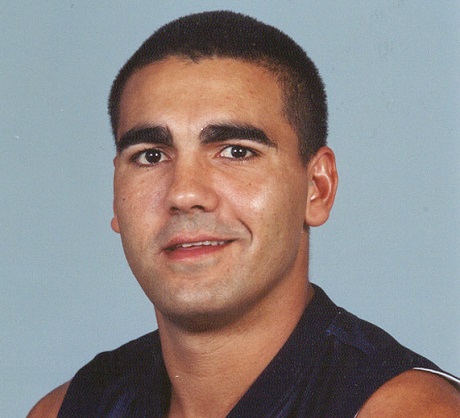 The tale of Justin Murphy has many chapters - from his elation at holding the ball high as the final siren sounded in one of Carlton’s most famous victories, to the devastation of wrecking his knee in a Grand Final the very next week. And from twice being recruited (and twice being traded) by the Blues, to eventually playing 185 senior games at four clubs in an AFL career that spanned 11 seasons.

Born in Victoria with a strong indigenous heritage, Murphy started out as a junior with the Kew Football Club and De La Salle Old Collegians, before moving on to TAC Cup football with the Central Dragons (forerunners of the Sandringham Dragons). A skilful outside midfielder and a thumping right-foot kick, Justin made the Under-18 All Australian team in 1993, and was recruited by Richmond at number 3 in the National Draft. The following year, he made a sensational start to his senior career when he kicked five goals for the Tigers on debut against Essendon.

But he soon clashed with Richmond coach John Northey, and doubts about his discipline began to emerge. As a consequence, Murphy played his twelfth and last game in yellow and black against Sydney at the SCG in May, 1995. Later that same season, he was traded to premiers Carlton for defender Ben Harrison and draft pick number 35, in a win-win deal for both clubs.

At Carlton, Murphy was allocated guernsey number 18, worn previously by “Captain” James Cook, and turned out for his first game in his new colours in the opening round of 1996 against Collingwood. Carlton won convincingly in front of 70,000 at the MCG, with Murphy notching up 19 possessions, 6 marks, 7 tackles and his first goal for his new club. Rounding off an impressive year, he played finals football for the first time, although the Blues didn’t lift when they needed to, and were eliminated by successive losses.

Murphy’s second finals series in 1999 marked both the apex and the low point of his career. After being demolished by the Brisbane Lions in a one-sided Qualifying Final at the Gabba in Brisbane, the Blues shocked everyone by bouncing back and inflicting a nine-goal hiding on the West Coast Eagles in the following week’s Semi Final at the MCG. Murphy was prominent in both of those games, averaging 24 disposals and five inside-50 entries per match, to help set up a Preliminary Final clash against Essendon.

Carlton started as rank underdogs against the Bombers, but the team played inspirational football for most of the afternoon and pulled off a sensational victory by one precious point. Murphy began at half-forward that afternoon, racking up 22 possessions, 5 marks and 5 inside-50s before the final siren sounded with the ball in his hands. His jubilation at that moment – as he held the Sherrin above his head in triumphant disbelief - was splashed across newspapers and television screens galore for weeks afterward, providing one of the iconic moments in Carlton’s history. More on Murphy's exploits on this day are explored in the exclusive Blueseum article - 'Bomber Blues'.

Within seven days however, Justin’s joy turned to devastation, when he tore ligaments in his right knee during the third quarter of the Blues’ Grand Final defeat by North Melbourne, requiring a full reconstruction that sidelined him for the best part of a year. Meanwhile, Carlton’s long-serving senior coach David Parkin had stepped aside in favour of his assistant Wayne Brittain, with whom Murphy later admitted, he did not enjoy the warmest of friendships. Still, it came as a shock when Brittain informed him late in 2000 that he had been traded to Geelong for the Cats’ draft pick number 11.

Although he had been an ardent Geelong fan throughout his childhood, Murphy had whole-heartedly embraced the Blues, and his rejection was hard to take. Yet to his credit, he knuckled down at Sleepy Hollow and had a good season, averaging 21 disposals in 18 games to finish third in the club’s Best and Fairest. But his heart was still at Carlton, as he had clearly shown late in the season during a physical encounter at Princes Park, when Geelong defender Darren Milburn smashed Blues champion Stephen Silvagni to the turf with a front-on charge as Carlton’s full-back stretched for a mark. While Silvagni was carried from the field, Murphy made his disgust at Milburn’s actions clear to everyone – including Milburn himself – so it came as no surprise when Justin was traded back to Carlton at the end of that one season.

After Geelong accepted Carlton’s offer of draft pick number 23 for Murphy, he and Brittain appeared to settle their differences. The Blues had made the finals again during Justin’s absence, and were confident of doing it again in 2002 – but the season turned into an unmitigated disaster for all concerned. Decimated by injury and with a gaping hole in defence created by the retirement of Silvagni, Carlton was the punching bag of the competition for most of the year. Brittain was sacked at season’s end - having overseen the Blues’ first-ever wooden spoon - while the entire playing list was subjected to intense scrutiny. Although Murphy’s statistics for the year had been relatively good (20 games, 15 goals, average 19.5 disposals per game) his lapses had become more frequent and the club needed more from him.

Carlton began 2003 in disarray under a new coach in Denis Pagan, shortly after being found guilty of breaching AFL salary cap rules. Fined close to a million dollars and denied access to the country’s best new talent for two years, the Blues cobbled together a line-up of veterans and retreads recruited from rival clubs and struggled through the year to finish second-last, with four wins from 22 matches. Although the season wasn’t without some personal highlights for Murphy (he played his 100th game for Carlton in round 1 against Sydney, and kicked five goals in a vintage performance against his old club Richmond in round 12) he generally found the going tough, as rival teams realised he could be tagged out of games. He averaged just 14 disposals in his 16 matches, then had a falling-out with his coach and the match committee and requested a trade to Essendon.

At first Carlton refused, and negotiations took longer than they should have, but eventually, after 115 matches in navy blue, Murphy was released to the Bombers in straight swap for defender Cory McGrath. Justin gave his fourth club good service in 40 games over two seasons, before retiring from AFL football at the age of 29 in September, 2005.

In 2006, Murphy joined two other former Blues in Corey McKernan and Anthony Franchina at Heidelberg in the Northern Football League, where he was spectacularly successful. In more than 100 games for the Tigers, Murphy played in four successive Premierships between 2006 and 2009, with the 2007 and 2009 teams remaining undefeated. In 2012 (aged 35) he transferred to Tatura in the Goulburn Valley Football League and won another flag when the Bulldogs easily accounted for Seymour in the Grand Final.

As late as 2014, Murphy was still playing suburban football with the Knox Falcons in the Eastern Football League.

Murphy’s 115 games in guernsey number 18 for Carlton fell just one short of the record held by 1945 Premiership player Arthur Sanger.