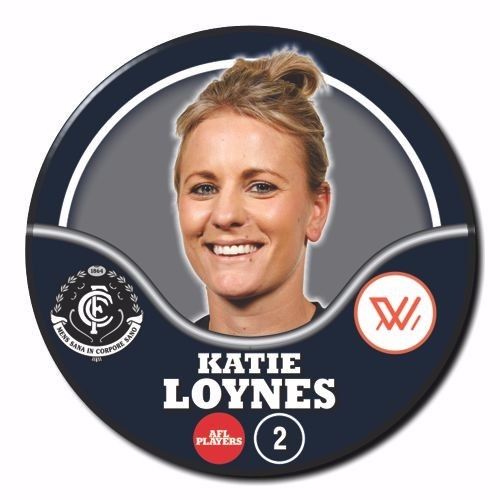 Katie Loynes is widely recognised as one of the “most dominant” midfielders in the competition, according to senior women’s coach Damien Keeping. Having recently recovered form a knee injury, Loynes has shown tremendous resilience and overcome challenges to achieve positive outcomes. Loynes had a solid first season coming 4th the inaugural best and fairest count. Loynes was drafted by Carlton with the club's fourteenth selection and the one hundred and tenth overall in the 2016 AFL Women's draft. She made her debut in Round 1, 2017, in the club and the league's inaugural match at Ikon Park against Collingwood. At the end of the 2018 season, she was the joint winner of the club best and fairest alongside Breann Moody.

Loynes getting her 'Diesel' on
Two crunching tackles and another attack on the ball inside 12 seconds – Carlton's Katie Loynes conjured memories of Greg Williams in the No.2 jumper against Brisbane last weekend. Loynes, who turns 32 on the eve of this year's NAB AFL Women's Grand Final, sprinted 40 metres to smash into Lion Brittany Gibson mid-way through the third quarter at Ikon Park. The ball spilled free, but Loynes was up and dragging Emily Bates down before springing back to get her hands on the crumb. "I pride my game on that physical presence," said Loynes, who nominated Blues great 'Diesel' Williams as her childhood hero and tries to play with the same never-say-die attitude. Loynes has endured multiple leg injuries (including a broken leg and ankle and knee reconstructions) and wears heavy strapping on her left knee. But none of that stops her attacking each contest like it's her last. In fact, her combative style had her right on the edge in the opening quarter on Saturday in an incident with Brisbane's Arianna Clarke. Loynes was found to have been careless in making low-impact contact with Clarke's head, but under AFLW rules, a potential one-match suspension was downgraded to a reprimand after Loynes took an early guilty plea. Loynes, who has played all nine of Carlton's AFLW matches since the competition started last year, said the Blues made too many errors and were on the back foot from the start against the Lions. "We need to work on the turnovers coming out of our backline," she said. After three rounds, the Blues' 2018 record mirrors last year's efforts, placing them with four other clubs on two wins and a loss. The Western Bulldogs are one of those five teams on eight points and, after a six-day turnaround, they face each other in the inaugural AFLW Pride game at Whitten Oval on Friday night. The fixture is a show of support for LGBTIQ communities and promotes inclusiveness, diversity and equality. Both teams will wear specially designed jumpers. While Carlton will miss suspended star forward Tayla Harris, the Dogs will line up without captain Katie Brennan, who injured ankle ligaments in the loss to Adelaide. "I am so excited to be a part of the first AFLW Pride game, but there is never a good time to play the Dogs," Loynes said. "The club is really excited to have senior coach Damien Keeping back. It was difficult losing him to illness after one match, but assistant Nick Rutley and the coaching staff galvanised the group." And Loynes, a physical education teacher at Mordialloc College in Melbourne's south-east, has found out one of the disadvantages of being a footy star. "It's not always fun going into work on a Monday after a loss," she said. "The year 12 students don't hold back – I got some flak for the goal I missed on Saturday night. They are probably worse than the coaches!" - Tom Pountney for AFL.com.au

Blue Bloods Award
Presented to the player that has made a significant contribution to the Carlton Football Club, the 32-year-old was acknowledged for her dedication to upholding the Club’s values consistently throughout the season. Meanwhile, 21-year-old Maddison Gay was named the Club’s Best First Year Player. Recruited as a rookie in 2017 after crossing codes from netball, Gay was elevated to the senior list and averaged nearly 10 disposals this season.

Loynes was delisted by Carlton at the conclusion of the 2021 season. A few weeks later it was announced that she joined Greater Western Sydney. In April 2022, Loynes retired after 45 AFLW games adding 9 games and 2 goals whilst playing for a season at the GWS Giants.

Loynes is a teacher at Mordialloc College, a Secondary School in Melbourne's South-East. She teaches Physical Education and Health and Human Development.