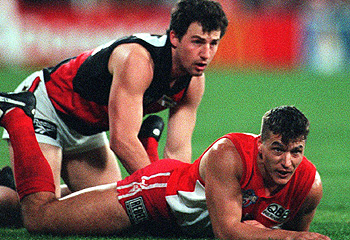 Kevin Dyson would a player that the Blues would say they let slip through their grasp. Dyson was originally recruited from Fitzroy via South Blackburn and spent the single season with the Blues in 1988 where he failed to crack it for a senior game. Dyson was at the Blues when there seemed to be a glut of players of the same ilk, that is a hard-running mid-fielder.

One of Dyson's strengths was that he was a booming kick, it was not uncommon to see him and Mil Hanna after training roosting the ball from the goal square and seeing how close they could get to hitting the centre circle of Princes Park.

After he was delisted by the Blues he had a run with VFA club Oakleigh whereupon he represented the VFA. In his time at Oakleigh, his confidence as a player grew, as did his frame going from 80kg as a Blue to 93kg when at Oakleigh. Melbourne took a liking to what they saw and drafted him. He played with Melbourne from 1991 to 1995 where he played 70 games and booted 25 goals. The Sydney Swans then approached Dyson with a lucrative contact and lured him north for the 1996 and 1997 seasons. At the Swans he played a further 35 games and kicked 3 goals, the highlight of his career was playing in the losing 1996 Grand Final with the Swans. At the end of the 1997 season, Dyson retired due to business committments. All up he was to play 105 games and kick 28 goals through sheer perseverance, he was a top midfielder in two teams that were at the top of their game during the time that he played for these two clubs.