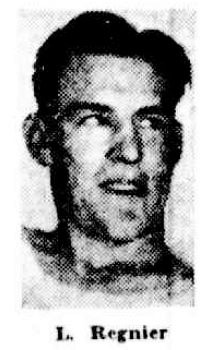 Lance Regnier, was born in Hawthorn. He played at various clubs including Warrnambool, Prahran 2nd's, Sandringham and St Kilda, before finally having a run with Carlton.

A tall and lightly-built follower who wore Carlton’s number 13 guernsey on debut against Essendon at Princes Park in the first round of the 1941 season, Lancelot Regnier went on to play seven matches in that troubled year, while Australia and the VFL came to terms with the looming spectre of World War II.

By then, Regnier and most of his team-mates had already enlisted for overseas service or homeland defence duties. Many would be called into uniform throughout the following four years, as the player lists at all clubs underwent constant change.

Regnier was given the honour and responsibility of leading Carlton’s rucks against the Bombers, with Charlie McInnes and veteran rover Jack Hale as his support. The big bloke put in an honest effort in a willing and close encounter that eventually went to the Blues by just three points.

Lance played the following week in a ten-point loss to Richmond, then was squeezed out of the side by the return from injury of Ron Savage. From then on he was an understudy to Savage, but still managed five more games. His last match was a memorable one, when Carlton slaughtered St Kilda by ten goals at Princes Park in mid-August. On that happy afternoon, Regnier shared the rucking duties with Savage and together they probably dominated, because clever small forward Paul Schmidt terrorised the Saints’ defence and kicked 11 goals.

Regnier went off to war after that, to be trained as a tank crewman. He spent three years with the home defence forces, survived intact, and in 1946 returned to Sandringham for one last season.