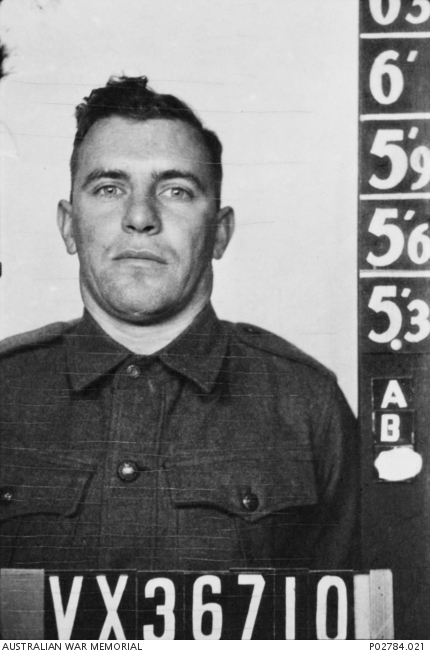 La Franchi was a ruckman who was born in Chiltern and was recruited from VFA Club Coburg in April 1938, he had spent two years at Coburg in the VFA after originally playing with Fawkner in 1936, he had also played at Brocklesby, NSW in 1937.

La Franchi headed back to his original VFA club Coburg when he was granted a clearance in May 1939, he would play the 1939 and 1940 seasons at Coburg. La Franchi was the 215th player to play senior footy with Coburg, he would play 45 games and kick 24 goals for Coburg.

Leo La Franchi decided to answer the call of duty and enlist in the Australian Army during WWII, his Location on Enlistment was Coburg, place of Enlistment was Royal Park (Parkville). He was a private in the 2/29 Australian Infantry Battalion, and his Service No. VX36710.

Vic. Paybook photograph, taken on enlistment of VX36710 Private Leo Lafranchi, 2/29 Australian Infantry Battalion. He was one of 145 men who were massacred by the Japanese at Parit Sulong on 22 January 1942 during the Malaya Campaign when wounded Australian and Indian soldiers were left behind by withdrawing troops after the Battle of Muar. They were rounded up by the Japanese and forced to surrender all of their belongings including their clothes, which were later returned. The men, now Prisoners of War (POWs) were beaten, tormented and denied food, water and medical attention. At sunset on the night of 22 January 1942, the men were roped or wired together in groups and led into the jungle where they were shot with machine guns, doused with petrol and set alight. Only Lieutenant Ben Charles Hackney and VX52333 Reginald Arthur Wharton survived, feigning death despite repeated brutalities by the Japanese. Private Lafranchi, aged 27, was the son of Vincent Lafranchi of Coburg, Vic.