Like many young men of his generation, Leslie Gordon Kittle faced adversity in childhood, and the horror of war in the prime of his life. He was called on to fight for his country in World War 1, and did so with consummate bravery. When peace was eventually declared, Les returned to Australia, and almost immediately took to the field for the Navy Blues in five senior VFL matches.

Part of a large family from Shepparton in central Victoria, Kittle grew up in a period of economic recession in the first decade of the twentieth century. By his late teens he was a typical bush youngster. He had left school early to support his family, and loved chasing a kick on the football field with his mates on a Saturday afternoon.

By 1915, with war raging in Europe, Les and many of those same mates were in uniform, preparing for their baptism of fire with the 8th Infantry Battalion in the trenches of France. Over the next three years, Les took part in some of the hardest and most costly offensives of the war, and in September 1917, he was awarded the Military Medal for outstanding bravery in the field. Less than a year later, he was wounded in action by a bullet that tore through his right thigh, just above his knee.

By the time he had recovered from that injury, the German army had been forced to an armistice, and the fighting was all but over. In May 1919, Kittle strode down the gangplank of a troopship berthed at Port Melbourne, and back into a country vastly changed from that which he had left.

One of the very first things that Les was determined to do in civilian life was to pull on his footy boots again as soon as possible. It was probably that specific desire that took him to Princes Park, where there were ample opportunities for any player with ability. So it was that barely a month after setting foot back in Australia, Les Kittle played as a Blue for the first time, in a round 7 match against Collingwood at Princes Park on Saturday, June 14, 1919. Wearing guernsey number 23, he shared the roving duties with Lyle Downs, and did his part in a narrow but satisfying 11-point win.

Downs and Kittle roved together in two more matches after that, before the ill-fated Downs collapsed on the field in round 9 against Richmond, with the first signs of the heart trouble that would tragically end his life the following year. In Downs’ absence, Kittle assumed the role of first rover, but played only two more matches before walking away from Carlton in unexplained circumstances after a 15-point defeat by Essendon in round 11. Somewhat remarkably, Les had not kicked a goal in any of his five games.

Five years later, Kittle surprised by bobbing up at Essendon, and playing for the Bombers in a 12-point win over Geelong at Windy Hill in round 13, 1924. Fifteen years after that, when the second World War erupted in similar political circumstances to the first, Les Kittle wasted no time in volunteering again. However, there was a problem. He had turned 45 years of age by then, and that was the upper limit for combat troops. Les didn’t want to be sent to guard some out of the way depot or camp, he wanted to fight – so he simply added 10 years to his birth date when he enlisted.

He got away with it, too – for a while. Until someone discovered his World War 1 record. The truth was revealed, and he was honourably discharged after a second army career that lasted precisely eight weeks. 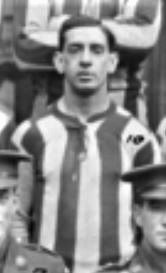 Les Kittle a member of the 8th Infantry Battalion Premiership team for 1919
In a month or so, Les would embark for Melbourne.
Image: AWM H00562