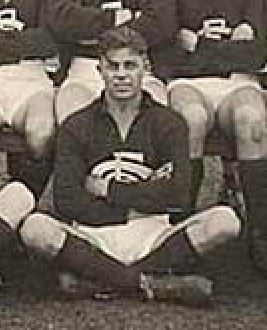 Les McCann joined an exclusive group of players - those to have worn the number 7 guernsey for Carlton - when he made his debut for the Blues in 1944. A quick and capable centreman, he arrived at Princes Park while still on wartime service with the RAAF.

He found his way to Princes Park, where his form on the training track convinced Blues coach Percy Bentley to give him an opportunity at senior level in round 6 of that year, in a match against St Kilda at the Junction Oval. McCann actually sat on the bench throughout the game, while the Blues thrashed the Saints by 9 goals.

A week later, Les made his ‘real’ debut on a half-forward flank against Collingwood, and the Blues kept up momentum with a 44-point demolition of our fiercest rivals. He kicked his first and only career goal in Carlton’s 30-point win over Fitzroy in round 10, and was promptly rewarded by being shifted into the centre for the next three games.

One of the positives to come out of 1944 for Carlton was the quality of the recruits brought to the club. Included in the list of debutantes for that year was a future club legend in Ern Henfry, four other Premiership players in Ritchie Green, Herb ‘Stumpy’ Turner, Alex Way and Doug Williams, as well as a quality 100-gamer in Jack Conley.

Four of these future stars were accomplished centremen, which explains why Les McCann was squeezed out of the team after round 13 when he was replaced by Graham Tudorduring the 3rd quarter with a dislocated elbow and was taken to the RAAF hospital and never managed to force his way back in. He was still just 23 when he parted company with the Blues at season’s end.