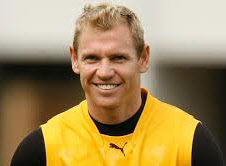 In October 2013, soon after playing the last of his 168 games for Hawthorn – including the Hawks triumph over Geelong in the 2008 Grand Final – Michael Osborne was appointed to the role of Development Coach at Carlton.

A Queenslander by birth, Osborne spent his entire junior football career with the Labrador Tigers in the QAFL before he was drafted by Hawthorn at number 11 in the 2000 AFL Rookie Draft. Within 12 months he was elevated to the senior list, and over the next 12 seasons gave the Hawks sterling service as a hard-running midfielder-forward. Strong in the air and dangerous up forward, he kicked 110 goals over his career, and was ranked among the Hawks’ best players when they beat favourites Geelong to snatch their tenth flag in 2008.

In round 7, 2012 Osborne tore a knee ligament and underwent a full reconstruction. The club delisted him at the end of the season, but was then immediately recalled at pick number 70 in the Rookie Draft. Although he managed only five senior games in 2013, late in the year he was a member of the Box Hill Hawks’ VFL Premiership team. As such, he stands as the only Box Hill player in their long history to have played in two first division Grand Final victories, in 2001 and 2013.

In welcoming Osborne to Princes Park, Carlton coach Mick Malthouse was full of praise and encouragement for the newest member of the Blues’ coaching panel. "Michael has played in a Premiership side and he knows what it's like to win - he also knows the work ethic you need to adopt to win," Malthouse said.

Unfortunately for both men, their two seasons together at Carlton produced little success. The Blues finished 13th on the ladder in 2014, and were sliding toward the wooden spoon in May 2015 when Malthouse was sacked by the board. Osborne coached out the year, but departed at season’s end.