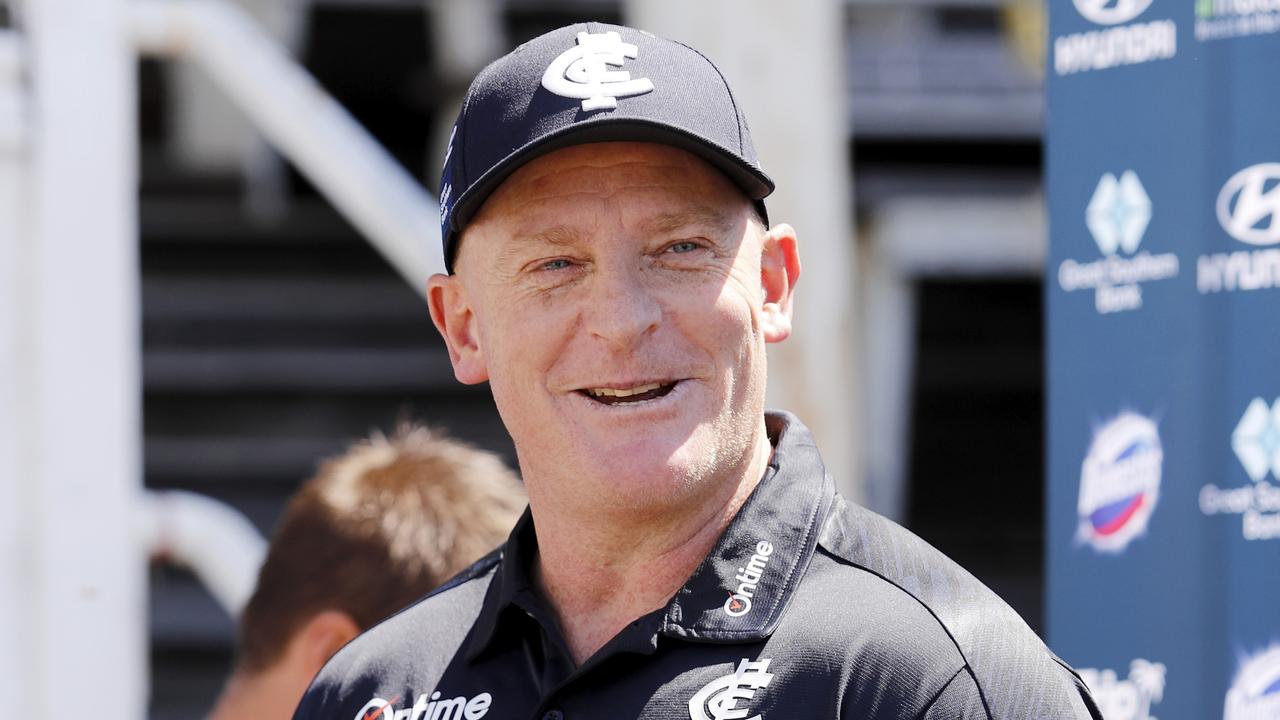 Michael Voss was announced as the 35th coach of the Carlton Football Club on the 23rd of September 2021.

Celebrating the news, Carlton President Luke Sayers said the appointment of Voss marked a significant moment in the path forward for the football club.

“We couldn’t be happier as a Board and a football club to officially announce Michael as our AFL Senior Coach,” Sayers said. “After a thorough and considered selection process, Voss’ credentials and vast experience in football made him the right person for the job.

“With Michael, we are getting someone who knows exactly what it takes to achieve high performance — which is consistently winning games of football, to provide the opportunity to compete in September and ultimately win premierships. He has experienced the ultimate triumph as a captain, he’s played a big role in driving success as an assistant coach and it’s where we want to get to at this football club.

“We know that we have a highly talented, versatile playing group and we firmly believe that Michael is the person to get the most out of our players as people and as athletes.

“We are looking forward to each of them getting to work with Michael, as well as his new assistant coaching staff, and we are excited to begin this next reset phase together with the entire Carlton family, starting with pre-season in November.”

Inducted into the Australian Football Hall of Fame in 2011, Voss’ contribution to the game sees him a true champion of the modern era, with a resume that boasts the AFL’s most notable achievements as a five-time All Australian – twice selected as skipper – a Brownlow Medallist and a three-time premiership captain.

Captaining the Lions to three consecutive premierships from 2001–2003 and a fourth Grand Final appearance in 2004, Voss’ leadership on the field had him destined to join the coaching ranks following his retirement in 2006.

Hanging up his boots after 289 senior games, Voss went on to become the successor of AFL Legend and his former coach Leigh Matthews, taking the reins at the Brisbane Lions ahead of the 2009 season.

Following five years at the helm, Voss departed the Club at the end of 2013 and secured a role at Port Adelaide 12 months later to oversee its midfield, playing an instrumental role in the Power’s increasing dominance as senior assistant coach under Ken Hinkley.

Voss said he was honoured to be afforded the opportunity to join Carlton and embrace a time of change at IKON Park. “I am incredibly excited and feel very privileged to become the new AFL Senior Coach of the Carlton Football Club,” Voss said. “It is truly a great honour to join a club as big and as proud as Carlton, and I take on this role with a great sense of pride and excitement for what’s to come. From the outside looking in, I think everyone can see the undeniable talent on the playing list, which I’m really looking forward to getting to work with. To go with that, there’s a massive, loyal supporter base that has stood by this football club for a long time.

“We all now have the ability to embrace this reset stage and look forward together. A united football club is a high-performing football club, and I want every Carlton member and supporter to know that myself, the staff and the players will leave no stone unturned to make that happen.”