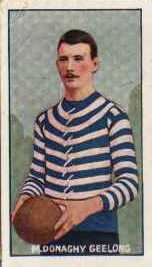 
Donaghy spent just one year with the Carlton Blues in 1898, before returning to his hometown of Geelong to establish a reputation as one of the finest defenders of his day.

He was invited to play at Carlton after impressing with the Wellington Football Club, based in Geelong. Described as a ‘grand player, adept at high marking’ in a contemporary report, Donaghy played ten games with Carlton, then decided that the arduous travel from Geelong to Melbourne was too much and gave top level football away.

He went back to Wellington for one year, before Geelong finally recognised his potential and he was convinced to resume his career at Corio Park. In six seasons with Geelong from 1900 to 1905, he played another 80 games, represented Victoria, and forged a reputation as one of the best centre half-backs in the game.