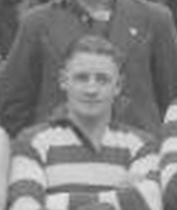 
Neil Tucker was one of four regular Geelong players who crossed to Carlton after the Cats went into wartime recession in 1942. Although he had been something of a spare parts player at Sleepy Hollow between 1935 and 1941 - racking up 45 games and 17 goals over those seven seasons – he was also a popular clubman who was renowned for his muscular physique, and his long, driving drop-kicks on the run.

Tucker played only twice for Carlton - both times in a back pocket, alongside his former Geelong team-mate George ‘Fibby’ Gniel at full-back – in successive narrow defeats by Essendon and Melbourne in rounds 6 and 7, 1943.

He went back to Geelong when the Cats rejoined the VFL in 1944, and had perhaps his best season. Although the Cats struggled to be competitive for much of the year, Tucker’s consistency produced another 17 games. He retired at season’s end, having played 61 VFL matches, and kicked 20 goals in a lengthy career.

Tucker, who was born in Geelong started his playing career at Anakie, then he moved to Geelong West prior to making his move to Geelong.