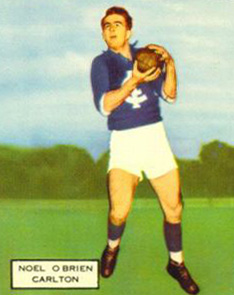 Noel ‘Nobby’ O’Brien was a brilliant young full-forward from Echuca whose first two seasons with the Blues marked him as something special. Strong, clever and a long, accurate drop-kick with his preferred right foot, he finished runner-up in the VFL goal-kicking award in 1955. But a serious ankle injury he suffered before his third year even began wrecked O’Brien’s career, and unquestionably robbed the game of a future star.

Originally from nearby Lockington, Carlton recruited O’Brien from Echuca after the youngster had impressed with his exploits for the Murray Bombers in the rough and tumble of the Bendigo Football League. Wearing guernsey number 26, ‘Nobby’ played his first senior game for Carlton in round one, 1954 against South Melbourne at the Lake Oval, kicking three goals as Carlton lost by 5 points to the stronger-finishing Swans. He kicked another four the following week in a loss to Melbourne, and was steady more than spectacular through to round five, when Carlton’s coach Percy Bentley sent him back to the Reserves for a breather.

He was recalled to the bench for the seniors in rounds 9 and 10, then hit his straps when he returned to full-forward in round 12. Perhaps riled by being dropped, or maybe challenged by Bentley to show what he could do, O’Brien responded with a string of dominant games. He kicked six in the return game against South Melbourne, five against Richmond in round 14, and a superb ten – from 12 attempts – in Carlton’s crushing 52-point win over Fitzroy at Princes Park in round 17. Carlton finished 1954 in a disappointing eighth place on the 12-team ladder, but O’Brien’s 45 goals from 15 matches was encouraging, and good enough to win him the Blues’ leading goal-kicker trophy.

He began his second season with four majors against North Melbourne in round one, and was a model of consistency right through the year. He kicked seven goals twice, six goals twice, and his total of 73 overall was exceeded only by Geelong’s Noel Rayson, who had the advantage of playing an extra game during the finals. Carlton improved marginally to finish seventh, but were still ranked among the competition’s also-rans.

When Percy Bentley retired in 1955 after 15 years at the helm of the Blues, his replacement, Jim Francis no doubt planned his forward strategy around O’Brien at full-forward. But cruel luck and circumstance conspired when Nobby landed awkwardly from a marking contest in a 1956 pre-season practice match – damaging an ankle so badly that he never played again. That incident robbed the Carlton Football Club, and the game as a whole, of a special talent. More than fifty years after his last game, Nobby O’Brien’s average of 3.69 goals per game is still the best in the Blues history.

Just how significant his 73 goals was, is the fact that it was the highest tally by a Carlton player since Paul Schmidt booted 77 goals way back in 1941.
Between 1941 and 1955 no Carlton player was to kick more than 49 goals.
Ahead, only one player was kick 50 goals, "Turkey Tom" Carroll with 54 in 1961, and only two Carlton players would score in the 60's, again, Tom Carroll with 62 in 1962 and Alex Jesaulenko with 66 in 1969.
Noel's 73 goals was to be the highest kicked for 28 seasons 1941 - 1969
Jezza would smash all Carlton records and the century barrier with 115 goals in 1970.
Carroll contributed 30% & 26% and Jesaulenko 19% & 32% of their team's goals.
O'Brien's goals had made up 37% of the team's goals, which is the all time highest percentage for any Blue!
Could he have been another Coleman? Of course we will never know, but his percentage of goals contributed are Colemanesque of his early years.
The loss of the 22 year old "Nobby" O'Brien who was just hitting his stride, possibly robbed the Blues of any September success in the mid to late 1950's and early 1960's.

The Argus April 24 1953;
"Echuca football club committee at a meeting last night refused to grant a clearance to Noel ("Nobby") O'Brien, who has been sought by Carlton as a full forward.
Messrs. Ken Luke (Carlton president) and Newton Chandler (treasurer) pressed the case for Carlton, but the committee was adamant.
O'Brien was told that if he played with Echuca this season a clearance would be guaranteed to him for 1954."
The Argus Monday May 4 1953;
"Echuca full forward Noel O'Brien whose transfer to Carlton was refused last week, kicked 13 goals in the match against Kyneton last Saturday. This equals the Echuca club's record for the most goals kicked by one player in a match. There is no chance of Carlton getting this outstanding player. Despite the controversy, Echuca still refuses to consider a clearance."
The Argus April 23 1954, on Carlton's new recruit The Argus' "experts" said,
NOEL O'BRIEN (Carlton)
"Not a Coleman but could become a useful spearhead.
Has courage, is a strong fighter in the packs, leads out well, has a sure pair of hands, and can kick straight."

Noel O'Brien scored 5 goals in a losing side against the Demons.
Melbourne's legendary coach Norm Smith said after the 65 point win on the M.C.G. June 4 1955;
"Bobby (Nobby) O'Brien, the Carlton full forward did a great job for his side. He is the best full forward we have met this year."