In times of joy and despair we often call our great team by nicknames other than the 'Blues'. In this page we will try to track down the origin of these names.

Although not seemingly a nickname, a newspaper report in 1866 referred to the "wild men" of Carlton.

This nickname came about during Carlton's earlier transit years before they had established a permanent homebase at Princes Park. The Blues had to use various locations in Royal Park until Council approval was granted to set-up at our now traditional base at Princes Park.

From research around that era, we understand that Carlton was once colloquially called 'The Butchers' owing to the cream chamois colour our guernseys became over time, which resembled the colour of a Butcher's attire.
From there on, and again according to "The Carlton Story", it would seem that our orange cap was abandoned for an all dark blue cap. "...there is no doubt this is when Carlton players became known as "the Dark Blues", although white also has always appeared in the club's uniform since 1871." (p 25).
In 1913 The Football Record reporting on the Round 7 clash against Richmond said;
"With something like accuracy in their shooting the Richmond lads might have had a good win to their credit; as it was they gave the "butcher boys" a hard shake, but the victory by Carlton more than compensated for that."

The Age in a report of the 22 July 1871 game against Albert Park referred to Carlton as "the blue caps."

Corroboration for this timing comes from Lionel Frost's "The Old Dark Navy Blues", where he writes "With the adoption of the blue cap and uniform the team began to be known as the Blues, before that the club had been known as the Bulldogs and The Butchers". The Bulldogs name is given a little further support in "The Carlton Story":
An article in The Age 13 June 1870 called "Out With The Bulldogs" is a report of the Carlton- Melbourne match on the previous Saturday. Possibly a reference to Carlton's nick-name. The writer also refers to Carlton as the yellow caps.
To read article click here> 1870 and scroll down to June 18.

The sturdy bulldogs have, by dauntless skill,
Made the Dark Blues the winning colour still."

Bells Life In Victoria, a newspaper mostly devoted to sports, has a reference to The Bulldogs in 1866.
In a Challenge Cup game on August 4;
It mentions one of the Carlton players, Gorman, at the head of the bulldogs did terrible execution by their resistless charges.

1883 Not Carlton related, but an early mention of an animal as a club nickname is North Adelaide, whose colours were yellow and black. The Evening Journal (SA) May 28 (p3) referred to them as "The Tigers."

Jack Worrall writing in the Australasian September 08 1928 p34 says,
"In many ways Carlton is a peculiar combination. The blues were known as the bulldogs away back in the early 70's, and the old club is still possessed of a rare fighting band, revelling in the play at close quarters."

Former original Carlton player and administrator George F. Bowen was a sportswriter (aka "Olympus") for the Melbourne Punch.
In 1892 May 05 (p11) in reference to professionalism in football, "For one only has to throw his memory back to the early seventies, when Ye Carltonne Bulldogges were a terror to their foes, to discover that quite a respectable number of them were just as competent to work in a brewery as the vast majority were to work it out. The curious part of the business being that Mr. Latham was the President of the Carlton Football Club at the time."
In September 22, he wrote about the problems now besetting Carlton and again he mentioned them in the old english sort of way as the "bulldogges."

During a club trip to Adelaide in 1887 one of the Carlton players, Thomas McCracken, wandering back to his lodgings one night decided to purloin a sheep carcass that was hanging in front of Conrads' butcher shop in Rundle Street. Unfortunately for McCracken a policeman saw the theft and arrested him. He was subsequently charged but released. The crowd for sometime afterwards would call out "Baa-Baa" when McCracken and Carlton were playing. (see below)
Tom McCracken died from typhoid fever two years later aged just 25.

In 1890, newspaper reports of a Carlton tour of NSW refer to us simply as the 'Carltons'. This may say more about the journalist than the public view of Carlton.


Excerpt from an article on Carlton players after the Semi Final, 1907.
Trove; Punch Sept 19 p17
Col Hutchinson writes in '100 Years of Australian Football' that 'Some newspapers before World War 1 referred to Carlton as the Brewers'.
At the start of the 1955 season Saturday's Age's cartoonist Wells depicted characters of all clubs eagerly vying for a football.
Carlton's character was a player whose head was wooden beer barrel!

The Catholic newspaper, The Advocate (July 07 p22), in its report of the Carlton vs Collingwood Round 9, 1921 match at Princes Park, twice referred to Carlton as the huskies.
However, the h was spelt in lower case unlike the upper case for the Magpies.
Click onto Round 9, and read a reproduction of the report, or look it up in Trove. 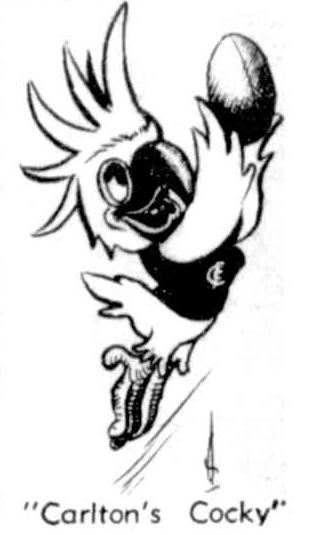 In the 1930's, there also seems to have been a colloquial linkage with the name 'the Cockatoos', surely after Cocky Marr from the 1930's, however, this linkage was not permanent. There was a further attempt to introduce the Cockatoo mascot after World War II, but this was not successful.
After the final game of 1956 the Monday edition of The Argus had cartoons of the teams that missed the finals.
The cartoon depicting Carlton was a rather disgruntled looking cockatoo. (Fitzroy had a glum gorilla)
To view click here> http://nla.gov.au/nla.news-page6561103

For more on Cocky Marr, click here.
Ken Hands is photographed in 1955 with Cocky Marr after it's encounter with a taxidermist.
To view click here> http://nla.gov.au/nla.news-article71676901

C'MON BLUEBAGGERS!....is an interesting one. Our best theory at this stage relates to an old laundry product used in all Australian households during and after WW2 (and internationally), called "Reckitts Blue" which came in a small white muslin bag. Reckitts Blue was put in the Copper or Washing Machine to whiten whites and brighten colours, and came in little blue bags.

In the Punch on 25th June, 1908 the club was referred to as the "Blue Bags" in what was a rather casual article compared to the more formal references found in the Argus and Age at the time. This may indicate that "Blue Bags" was a common reference at the time from the terraces.
https://trove.nla.gov.au/newspaper/article/176017166


However, as Col Hutchinson writes in his book '100 Years of Australian Football', "Carlton has always been known as the Blues, or the Navy Blues and musically as the Old Dark Navy Blues'.