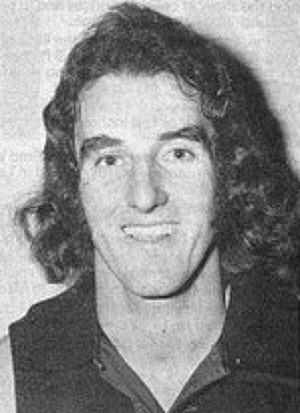 Recruited by Carlton from Bendigo League club Sandhurst in 1970, Paul Hurst was a pacey, left-footed utility who suffered a debilitating ankle injury just as his career was gathering stride in his debut season. After a lengthy recuperation, he fought his way back into Carlton’s senior team as a running defender, and in 1972 enjoyed a stellar year that culminated in one of the Navy Blues’ greatest Grand Final victories.

‘Hursty’ came to Princes Park at an opportune time for an ambitious young footballer from Carlton’s fertile recruitment zone in central Victoria. Under coach Ron Barassi, the Blues had contested the 1968 and ‘69 Grand Finals, and were hell-bent on doing it again. Hurst impressed in the 1970 pre-season trial games, and was selected to make his debut - off the bench - in Carlton’s first game of the year against Essendon at Princes Park. Champion forward Alex Jesaulenko made the occasion a special one; kicking nine goals as Carlton downed the Bombers by 49 points.

Only weeks later however, Hurst’s promising progress came to a crashing halt in round 9 against Hawthorn at Princes Park. He was tackled in a pack, twisted awkwardly, and badly damaged an ankle. While he underwent a long and frustrating period of repair and recuperation, his team marched on to claim another Premiership that glorious September. Hurst eventually returned to play three matches late in 1971, but he wasn’t back to complete fitness until the 1972 season began.

In round two of ‘72, Carlton met Collingwood at Victoria Park. Blues’ captain-coach John Nicholls asked Hurst to play at half-back that afternoon, alongside stalwart Bruce Doull and young veteran Phil Pinnell. The game was a torrid scrap from the first bounce, and ended in a thrilling draw at 75 points each. Every draw brings disappointment, yet one of the real positives to come out of that afternoon was the display by Hurst, whose creativity and accurate disposal was a revelation. He was an instinctive defender who had found his niche in a potentially great team, and he was bound for glory.

Throughout the rest of that gruelling 1972 season, Carlton’s defence was remarkably durable. Champions Geoff Southby and Bruce Doull held down the key positions, ably supported by Hurst, Pinnell, John O'Connell and Vin Waite. With Brent Crosswell, Kevin Hall and youngster Rod Austin making cameo appearances in the back half when required, the Blues’ 18 wins (as well as that draw with Collingwood) secured the minor premiership – two points ahead of Richmond, who had comfortably beaten the Blues twice during the season.

Although a third Grand Final in a row was looming for the Blues, the enormity of the task became clear after Carlton and Richmond fought out another draw in the second Semi Final. A week later, in the replay, the Tigers came out smoking, thrashed Carlton by 41 points, and took over outright favouritism for the flag – more so after Carlton was forced to pull out all stops to beat an undermanned St Kilda in the Preliminary Final.

‘Hursty’ pulled on his number 33 guernsey for just his thirtieth senior match on Grand Final day, 1972. More than 112,000 fans crammed into the MCG for an eagerly-awaited clash between traditional rivals, and few who were lucky enough to be there will ever forget it. Knowing that Richmond were confident after three wins and a draw in their last four starts against Carlton, and fresh after a week’s rest – the Blues decided on a bold strategy of attack at all costs, banking the class of the team’s forwards to out-score the Tigers, whatever the circumstances.

The game plan worked superbly. Carlton stunned the Tigers, and set all sorts of records in claiming the Blues’ eleventh Premiership in the highest-scoring Grand Final ever played. The final score was 28.9 (177) to 22.18 (150) with forwards Alex Jesaulenko, Robert Walls and John Nicholls kicking 19 goals between them – but defenders Doull, Southby and Hurst were equally effective in holding the Tiger forwards in check for most of the match.

That fabled September afternoon (and the celebrations afterward) marked the zenith of Paul Hurst’s career. Although he continued on at Princes Park for another two years, during which he remained a popular member of the senior squad, he found his opportunities becoming increasingly limited by the maturity of Crosswell, Austin and McKay, and the emergence of another promising youngster in Ray Byrne.

A thigh injury suffered in Carlton’s 22-point win over St Kilda at the Moorabbin Oval in round 22, 1974 – on a windy, wet day when Vin Waite kicked seven goals at full-forward - hastened Hurst’s decision to seek a fresh start. At the end of that year he requested and was granted a clearance to Melbourne, where he went on to play another 19 games and boot 6 goals in seasons 1975 to 1977. Hurst failed to kick a goal in his 53 games at Princes Park but opened his Melbourne account in his first game. After impressing during his first year Hurst only played three games over the next two seasons before leaving the club.

In 1978 Paul moved on to Coburg in the VFA, and gave the Lions effective service for another two seasons in the twilight of a good career, he would play 26 games and kick 7 goals for the Lions.