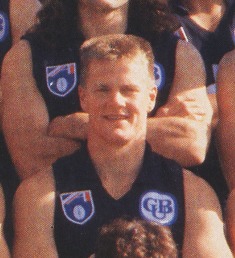 Paul Williams had originially played with St Kilda (1989 - 1990). He was selected by the Blues in the 1991 Pre-season draft at pick 52, this was the Blues fourth pick overall. Williams was a tall who could play in key positions or have the occassional run in the ruck.

Note that some time later, ex-Collingwood player Paul Williams and namesake joined the Blues as an Assistant Coach. Use the other biography if you would like to read of his coaching career at Carlton.