The Blues lifted again against Collingwood, storming to a 38-point victory at the MCG.

With this win Carlton became the first team to accumulate 100 wins against Collingwood.

Justin Madden dominated the ruck against Manson and Cloke, which allowed the Blues to open up a 39 point lead at quarter time. Carlton were never headed, despite Glascott being carried off the ground with a bruised back early in the third quarter,

Wayne Johnston lived up to his 'Dominator' tag with a best on ground performance, beating three opponents (McGuane, Morwood and Brown) in Carlton's 38-point win. which was set by seven goals to one in the first quarter. "It was more of an attacking final than a defensive one, as the ball was continuously being repelled after moving forward," Johnston said.

Naley the Catalyst
Former South Australian roving star Mark Naley was one of the catalysts for Carlton in its convincing 38 point victory over arch rival Collingwood in Sunday's big clash at the MCG. Naley used his explosive pace to great advantage and ripped holes in the Magpie defence on many occassions. He made the most of Carlton giant Justin Madden's ruck dominance and exposed the deficiencies Collingwood has in the small man department. The Blues will be looking to Naley to continue his good form in Saturday's second semi final at VFL Park. - Tony Greenberg Inside Football.

Evans Burns
It was good to see Carlton rover Bernie Evans get a chance in the senior side on Saturday. Evans warmed the bench against Collingwood until David Glascott injured his back and then kicked a goal with his first touch of the ball. Evans, of course missed last year's premiership through suspension and will be making every post a winner this year. Little wonder he was pleased with his vital goal against Collingwood. - Jim Main Inside Football.

The Real Carlton
I wrote in this column last week that Carlton supporters should forget their team's form over the last few home and away rounds. I wrote: Don't think that the Carlton you have been seeing in recent weeks is the Carlton you will see in the finals". Well, we all saw what happened when Carlton tackled Collingwood in last Sunday's Qualifying final at the MCG. The real Carlton stepped into battle and Collingwood never really had a chance against the brilliant Blues. The Carlton small men swarmed over the ball and their tall forwards were far too good for the Magpies. Stephen Kernahan probably showed his best marking form of the season, while Jon Dorotich and Peter Sartori also gave the Magpies headaches. But the real Carlton match-winner was Wayne Johnston, who surely must be one of the most courageous performers in the VFL. Johnston was at the bottom of every pack in the centre square and his work there helped the Blues create goal chances in every quarter of the match. If Hawthorn is going to defeat Carlton on Saturday it will have to stop Johnston, probably the best big-occassion and most damaging player in the VFL. - Jim Main Inside Football. 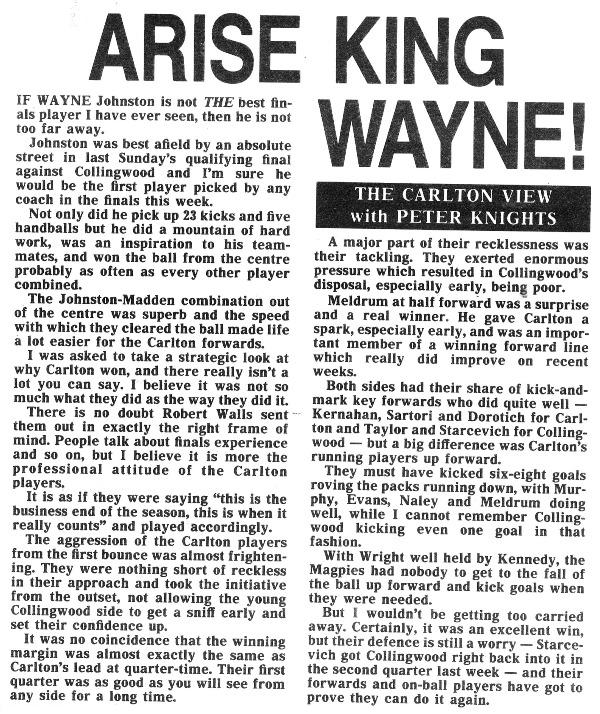