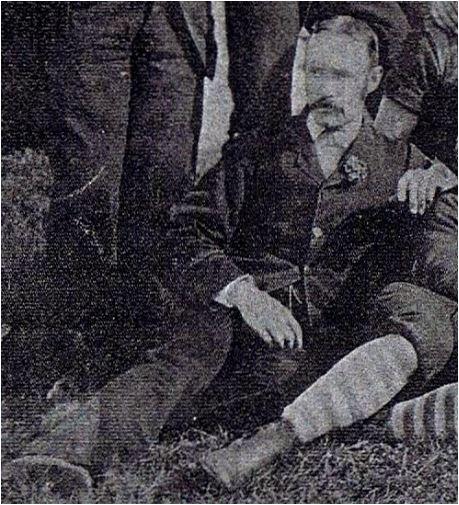 Recruited from Star of Carlton

Left: R. Morgan appears in 1884 Carlton Football Club team photo against Adelaide.
His name does not appear in regular home and away matches for the 1884 season.

1885 August 15
Morgan named in Carlton team that played Williamstown at Princes Oval.
His possible debut and only game for the Blues?, there were no details of this game published in The Argus.
This is the only time Morgan's name appears this season.

He may have played in the pre-season match against Star Of Carlton on April 25, these details are also missing.

He is not mentioned in First Twenty team lists or available match reports for 1889 and 1890 seasons.
Perhaps Morgan spent most of his time at Carlton playing in the Second Twenty.
Although it was not unusual for players to be brought into the side as a late minute replacement.
Most people worked on a Saturday morning and the cable tram and train system was only means of getting around, this made it difficult for some players to attended games.

1892 April 23
Morgan was named in the 27 man Carlton squad to play Brunswick in a pre season match on the University C. G.