One that got away... 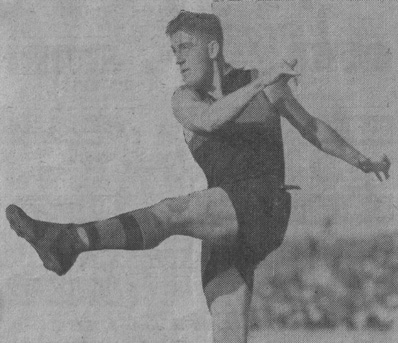 
Another fine player in the category of ‘those who got away’, Ralph Green was recruited by Carlton from Sturt Football Club in 1932. He managed only five unspectacular matches as a forward for the Blues, then crossed the Nullarbor to play in a Premiership team with West Perth. In 1935 he went home again to South Australia, and rebuilt his career as one of the great full-backs of his generation.

Sturt knew they had discovered a star when Green first played senior football as an 18 year-old specialist half-forward in 1930. Within a year, more than one VFL club was courting the youngster, and Sturt didn’t stand in his way when Carlton invited him to Princes Park during his second season at Unley. Ralph travelled east early the following year, and played his first senior match for his new club against South Melbourne at Princes Park in round 2 of 1932.

Ironically, while Sturt marched to another SANFL Premiership in his absence, Green couldn’t cement a place in a strong Carlton team that wound up the regular season as minor premiers. After only five appearances and two goals in our number 13 guernsey, Ralph tossed in his bid for VFL glory and went back home.

Wearing the double blue of Sturt again in 1933, Green hit his straps as a player, and showcased his versatility when he represented SA at the Sydney carnival as a hard-working and tenacious follower-forward. He was destined to play seven times in interstate matches for the Crow-eaters, and this was an auspicious debut.

In 1934 Ralph was on the move again – this time to West Perth, where he gave the Cardinals a stellar year. In 20 games he kicked 17 goals as a free-running centreman or half-forward, and helped drive the Red and Blues to an emphatic 44-point Grand Final victory over East Fremantle. That was to be Green’s only taste of Premiership success – but also the prelude to a new chapter in his career.

After that one year in the west, Ralph settled back at Sturt. Somewhere around that time, he filled in at full-back for a series of matches, and took to the position like he was born to it. His pace off the mark, superb concentration and instinctive ability to stay close to his man made him a tough opponent for the best of forwards – while his booming long drop-kicks from goal became his trademark.

Over the ensuing five seasons, Green was the outstanding full-back of the SANFL, and was desperately unlucky to miss out on playing in Sturt’s 1940 Premiership team through injury. He was appointed captain-coach of the Two Blues in 1941, at the height of the fear and deprivation of World War II. Sturt made it through to another Grand Final, but lost to Norwood in a thriller.

Green retired as a player after that disappointment, and signed with the RAAF for a brief period, as the SANFL went into wartime recess between 1942 and ’44. When the competition resumed in 1945, he was appointed senior coach at Sturt and guided them into the finals in each of his three years at the helm.