Reece's younger brother Scott Langan also played U/19's and reserve grade football for the Blues. After being delisted by the Blues, Langan headed to VFA Club Coburg where he played in their back to back premiership teams in 1988 and 1989, he would play 51 games and kick 48 goals with the Lions. Langan also had a run with ACT club Ainslie and played in their 1994 premiership team.

Langan was recruited from Bendigo League football club Northern United. With Sandhurst’s Kristan Height (2016) the equal oldest winner for the 2000s at 33 years of age. Another outstanding centreman like Saunders, Reece was in his second season as captain-coach at Eaglehawk in 2000. In the year he won the medal Eaglehawk had finished third with a 12 wins-6 losses record but bowed out of the finals in straight sets. The Two Blues lost the qualifying final to Kangaroo Flat 16.11 (107) to 13.6 (84) and the first semi to South: 14.14 (98) to 11.12 (78). 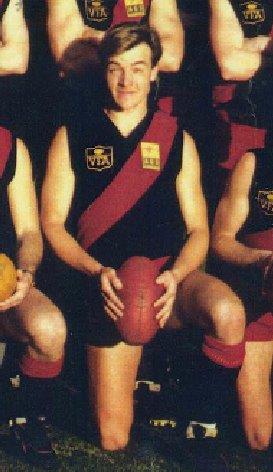