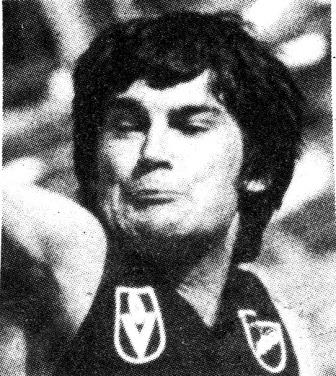 In July, 1977, Renato Serafini joined not one, but two exclusive lists of VFL players when he made his debut for Carlton against South Melbourne at the Lakeside Oval. Earlier in the year, the tall, agile specialist full-forward had been cleared to the Blues after playing his 81st and last game for Fitzroy, and when he was included in Carlton’s team to meet the Swans, he became one of a handful of modern-era individuals to represent two League clubs in the same season. Wearing guernsey number 23, Serafini sat on the boundary pine for three quarters that afternoon, but took a clever mark late in the game and goaled with his first kick to seal victory for his new club.

In his six seasons at Fitzroy, Serafini was at times a match-winner, although prone to frustrating periods of inconsistency. A schoolboy star at Assumption College in Kilmore, he was recruited by the Lions in 1971 and had been the struggling club’s leading goal-kicker in 1975 – albeit with a modest total of 34. He twice kicked six majors for the ‘Roys, and throughout his time at Brunswick St. was told that he could be a star at a stronger club.

Eventually, Serafini crossed to Carlton in 1977 but found the transition a tough one. After four matches in his first season (three as a reserve) he damaged a shoulder in round 20 against Essendon, and didn’t play again that year. It was a similar story in 1978 – all three of his senior games started from the bench, and he was unable to capitalise on Carlton’s tactic of letting him loose on a tired defence. Having played most of the year with Carlton Reserves, Serafini departed from Princes Park at the end of ’78 and joined VFA club Frankston.

In his first year with the Dolphins – coached by ex Blue Chris Pavlou - Serafini kicked 95 goals to finish runner-up in the competition. In 1981 he kicked 11 majors in a match against Geelong West, and by the end of that season had amassed 271 goals in 52 games for the bayside club.

In 1982, Serafini switched to rival VFA club Coburg, to finish off a prolific career that never quite reached its full potential – as demonstrated when he kicked a personal-best 12 goals against Williamstown the following year. Serafini would play 23 games and boot 116 goals for the Lions.

The same year that Serafini left Fitzroy, the Lions recruited his younger brother Lorenzo – or Laurie – who played 146 games as a defender, represented Victoria, and became revered as a Fitzroy champion.

During his football career at Fitzroy and Carlton, Renato Serafini studied to become a school teacher. Near the end of his playing days he won a position at Xavier College, and taught there for the next 16 years.