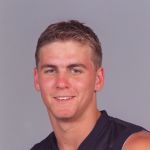 Richard Kelly was a taken at pick 60 in the 1999 National Draft, the club's 1st pick of that draft (the Blues had traded away their first three picks for O'Reily and Mansfield). Kelly was recruited from the Perth FC that was affiliated with the WAFL. His junior club was Maddington JFC. Kelly would play a single season with the Blues in 2000 before heading back west to WAFL club Perth.