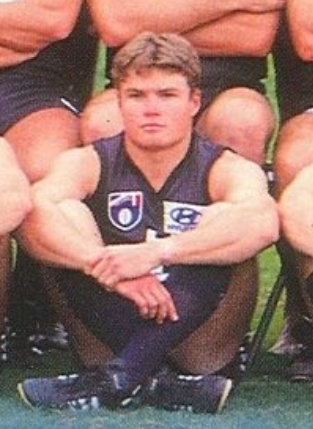 
Richard Vandenberg played Reserve grade football for the Blues in 1997, he didn't make the grade with the Blues and headed back to the VAFA. He was later recruited by the Hawthorn Football Club in the 1997 AFL Draft with pick 78. He was the captain of the Hawks for the final three years of his career 2005 -2007.

An interesting fact was that it was the AFL that prevented Vandenberg from playing with Carlton. He was offered and accepted a contract and was all set to play and on the eve of the season the AFL, Ian Collins, indicated that Vandenberg was ineligible. The grounds for this ruling was that he had not lived in Victoria for 3 years and was ineligible for the Supplementary list (now rookie). He was therefore forced to sit out the 1997 season and ended up being drafted to Hawthorn with pick 78 in the National Draft. Carlton had two picks in the 80's and was going to draft Vandenberg with one of these before the Hawks swooped on him. David Parkin did ask Vandenberg to train for the remainder of the 1997 season but it was not feasible given he was still playing and studying at uni.

Vandenberg is of Dutch descent. Growing up near Wentworth, New South Wales, a small town near Mildura just on the northern side of the Murray river in far western new south wales he played junior football for the local club. He moved to Melbourne to study at the University of Melbourne in 1995, playing with the University Blues where he attracted the attention of Hawthorn recruiters.

Vandenberg had his best seasons in 2000 and 2001. He was made captain when Shane Crawford stepped down for the 2005 season. He struggled to recapture his best form, but in 2006 fitted into his new role more solidy. On September 4, 2007 Vandenberg officially announced his retirement in a press conference.

Vandenberg was a solidly built player with a reputation for aggressive play, fronting the AFL Tribunal on many occasions (his most recent being a 4-week suspension in 2006). In 2004 he was involved in the 'Line in the Sand' incident, when former AFL star Dermott Brereton allegedly told the players to make a physical stand against the Bombers who had physically intimidated the Hawks for many years. As a result of he was suspended for 6 games but the Hawks weren't to be pushed around by the Bombers again.

Vandenberg retired at the end of the 2007 season after leading the Hawks to their most successful campaign since 2001.

He is distantly related to Ex Blue Dick Vandenberg.