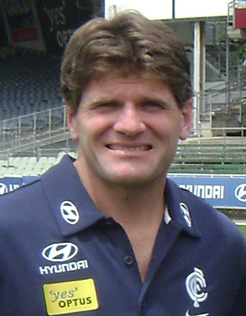 At the end of the 2008 Trade Week, Carlton announced that St Kilda Legend Robert Harvey would be joining the Club from Season 2009 onwards. Harvey, a dual Brownlow Medallist, had played 383 games with St Kilda.

"I am excited about the opportunity to be involved in coaching, in particular with the young list at the Carlton Football Club. In my meetings with Carlton I have been very impressed with the professionalism displayed and the exciting outlook for the future,"
Robert Harvey, New Development Coach

"We are delighted that Robert has chosen Carlton ahead of other opportunities that were presented to him by AFL clubs and this reinforces the respect this club is gaining in the industry. Robert is a quality person who brings valuable experience to our club and is fresh out of playing having retired at the end of the 2008 season,"
Greg Swann, CEO, Carlton Football Club

Harvey remained in this position for the 2009 and 2010 seasons before resigning and heading back to his beloved Saints for the 2011 season.