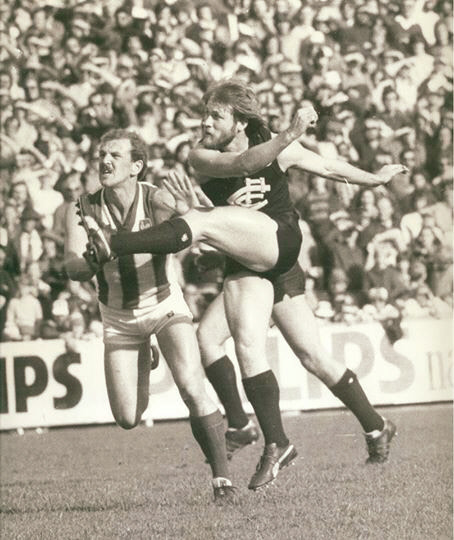 Dean Rodney Ashman stands as one of Carlton Football Clubs’ all-time greats. In 236 games over 14 seasons between 1973 and 1986, he was a star in the Blues’ 1981-82 Premiership campaigns, and represented Victoria on four occasions. In 1981, he finished one vote short of winning the Brownlow Medal, and one point shy of Carlton’s Best and Fairest. In the twilight of his career he added two Reserves flags to his outstanding record, and in 1993 was elected to Carlton’s Hall of Fame. Seven years after that, “Ashy” was selected in the forward pocket of the Blues’ Team of the 20th Century.

However, many of those honours would probably not have eventuated had North Melbourne been successful in luring Ashman away from Princes Park in 1979. The Shinboners came up with a huge offer that Rod provisionally accepted, but Carlton stood firm and refused to clear him. As a consequence, he remained in limbo for much of the year and didn’t play a senior match until August, when North relented and withdrew their legal action. The Blues welcomed their blonde star back, but he injured a knee on the eve of the finals and missed out on selection in that years’ Premiership side.

Ashman first arrived at Princes Park in the summer of 1972. A boom recruit from the Eaglehawk Football Club in Bendigo, he was tied to Carlton under the VFL zoning regulations then in place, and was coming off a sensational year in junior football. An athletics champion at Eaglehawk High School, Ashy hit the headlines as a high-marking forward for the Two Blues’ Under-18 team when he kicked 137 goals for the season – including a haul of 18 majors in one afternoon against Rochester. Eaglehawk won the BFL Under-18 flag that year, and Rod was a clear winner of the competition Best and Fairest.

At Carlton, Ashman was allocated guernsey number 14 (previously worn by rugged forward Ricky McLean) and told by coach John Nicholls that his days of perching on the top of packs were over. Big Nick and the Blues wanted a rover – and had found one of the very best. At 175 cm and 76 kg Rod wasn't the biggest or fastest on-baller in the game, but he was a superb ball-handler and his aerial skills were exceptional for his size. His disposal by hand or foot was always accurate, and in time his bravery was to become legendary.

Ashman played his first senior match for the Blues against Fitzroy on a Saturday afternoon at VFL Park, Waverley on May 5, 1973. Starting on the two-man reserves bench alongside Peter Fyffe, he ran on to the field late in proceedings and gained only a few possessions as his team bolted away to a big win. The following week, he kicked his first career goal in an emphatic loss to Richmond, and by early June had three senior matches to his credit – all as a reserve. Yet despite the glamour and excitement associated with his emergence as an elite footballer, the 18 year-old was homesick. He was granted leave to return home to Eaglehawk, where he was immediately selected as the youngest-ever member of a BFL representative side. After winning the country championship, Rod was back at Princes Park by late July and resumed where he had left off, showing steady improvement in six more matches in the latter part of the season.

Ashman’s career really gained momentum in 1974, when he played every match in Carlton’s season and kicked 29 goals. Only David McKay and Peter Jones took more marks for the Blues that year, and only Bruce Doull, Barry Armstrong and Trevor Keogh earned more Best and Fairest votes. The following season, Ashman played his 50th game in his first appearance in a final, against North Melbourne in a Qualifying Final at the MCG when the Blues were beaten by 20 points. In round 19, 1978, Rod celebrated his 100th senior game against the same team (Fitzroy) and at the same venue (Waverley) where he had made his debut almost five years beforehand. On a miserably cold and wet afternoon, players from both sides slipped and slithered on all parts of the field, but Ashman handled the wet ball with amazing surety, racking up 42 disposals to be clearly best on ground in a hard-fought victory. Later, Carlton’s season ended in a dramatic 15-point Semi Final loss to Collingwood, and the devastation of that defeat was compounded by Ashman’s request for a transfer to North Melbourne.

Not surprisingly, Carlton flatly refused and Ashman was forced to stand out of the game. Months of impasse ensued, before the Kangaroos eventually backed down and Rod resumed his career in navy blue. Ironically, his first game back came against North Melbourne in the Match of the Day at Arden St. in round 18, 1979. To Carlton’s glee (and North’s chagrin) Ashy starred with 39 disposals and two goals in a 22-point win to the Blues. Rod’s return strengthened Carlton’s position as a real flag contender, but barely a month later, he damaged a knee in the last round of home and away matches. On Grand Final day, he was a spectator when Carlton exacted revenge on Collingwood to claim the Blues’ twelfth VFL flag.

Ashman’s first real opportunity to be part of a Carlton Premiership team came in 1981, when Carlton and Collingwood faced off in the Grand Final once more. By then, Rod was riding the wave of a spectacular season that had seen him represent Victoria, collect no fewer than seven major media awards, and finish one vote behind joint winners Bernie Quinlan of Fitzroy and Barry Round of South Melbourne at the Brownlow Medal count. An enormous crowd of more than 112,000 packed into the MCG for the decider on a cold and wet Saturday afternoon, to see Carlton’s ruck division lead the way in a hard-fought 20-point victory. Ashman kicked three decisive goals, and his elation at winning a flag at last provided one of the post-match highlights. A few days afterward, Rod fell one agonising point short of champion defender Ken Hunter when the votes for the Blues’ Best and Fairest award were counted.

In 1982, Carlton defended their title with a gutsy Grand Final victory over strong favourites Richmond. Ashman’s 23 disposals and two goals were decisive, although he finished the match suffering concussion for the umpteenth time. From then on, the club doctors insisted that he wear a padded bicycle helmet on the field, and it didn’t make a scrap of difference - he just kept boring in regardless.

Rod played his 200th match and was Best on Ground when Carlton beat Collingwood at Waverley in round 15, 1984, before the season ended in dismay when the Blues were bundled out of the finals in straight-sets at the hands of Hawthorn and Collingwood. That proved to be Ashman’s last finals campaign at senior level, although he continued to be a reliable contributor for the Blues for another two seasons.

In round 8, 1986, Carlton beat Geelong by five goals at Princes Park. Ken Hunter was best on ground, and Ashman suffered a thigh injury that heralded the end of his senior career. Although he was able to return to the field some seven weeks later – by coincidence, in round 15 against Fitzroy at Waverley – he broke down again early on, and didn’t play another senior match.

In September of that poignant year, Carlton’s seniors and reserves teams were both in action on Grand Final day, in front of another packed house at the MCG. Ashman made his last appearance in the famous old navy blue guernsey that afternoon, and went out with a bang - kicking five goals as Carlton Reserves demolished Footscray by 74 points. Later, Hawthorn destroyed Carlton just as mercilessly in the senior decider, before the Blues bid farewell to Ashman and a raft of other stars including Bruce Doull, Mark Maclure, and Des English.

Happily, Ashy wasn’t immediately lost to the club. In 1987 he was elected to the Board of Directors, and became the seniors' skills coach the following year. In 1989 he accepted the role of Reserves coach, guiding his young team to another Premiership in 1990. Three years later, he was inducted into the Carlton Hall of Fame, and in May 2000 he was named in a forward pocket in the Blues' Team of the 20th Century. Rod's enormous contribution to the Carlton Football Club continued into 2007, when he was appointed to the role of Player Welfare Officer at the insistence of incoming club President Richard Pratt.

Ashman played three milestone games - his first, his 100th and his last - against Fitzroy at VFL Park, Waverley.
He twice kicked six goals in games at Princes Park – against Geelong in Round 12, 1975, and Richmond in Round 14, 1984.
In 1989, the Bendigo Football-Netball League announced that the player judged best on ground in the Under 18 Grand Final each year would be awarded the Rod Ashman Medal, in honour of the champ from Eaglehawk.
Ashman is the uncle of another Blues great in Peter Dean.