Carlton drew with Fitzroy at Princes Park. Note the date, one day prior to the WWI Gallipoli landings.

Carlton would come from behind in the last quarter to draw the match against Fitzroy. The result would leave both teams in equal 4th in the 9 team competition.

Remarkably this was the third draw in Round 1 matches the Blues had played in 5 seasons following tied encounters with Essendon in 1911 and Collingwood in 1914.

"About 18,000 people attended at Prince's Oval, where the pennant won last season by Carlton was unfurled by much cheering.
Play opened with a Fitzroy rush, and first goal was scored for the Maroons by one of the new men, Crone. Another 'Roy try, by Freake, struck a post. Carlton then made a decided effort, which matured into a goal by Morris, who had been well served by Fisher. Scores were together at 1-3 when the bell sounded.
Immediately after changing ends Fitzroy dashed in, and Parrat scored six points, to be followed at once by Freake with a like result. Give-and-take of a lively nature culminated in a special dash by Carlton, which Fisher utilised to get a goal. Then Daykin took a place shot, and flags waved to Carlton cheering. Fitzroy's reply was disappointing to them, a shot by Letherbridge making their second poster. Freake presently received a mark close up, and put the ball through. By half-time the "crossing" were equal at 8 each; but Fitzroy claimed the better score of points.
This advantage was increased during the third term, first by Parrat with a sixer. Carlton wasted energy and opportunity at this stage, their forward work being less effective than the general play. After the Maroons had also thrown away some chances Shaw made a nice run and a goal, the effect that Fitzroy showed 16 points to the good at last change.
To the delight of Carlton folk the Blues opened with a goal by O'Brien, but three singles followed when better rewards appeared likely. Fitzroy replied gallantly; but found Carlton's defensive work equal to a very special occassion. Presently Challis provided another sixer for Carlton, and also provided a behind that bought the scores exactly together. Needless to say, excitement had risen to fever heat. With four minutes to play, and the men striving like young horses, spectators were treated to an experience not likely to occur again for many a day. Rush and rally were countered by rally and rush, until the bell rang on a tie.
All were fairly well agreed that honors had been easy. It was a case of diamond cut diamond, with no measurable advance to either force. For the premier Blues, Dick, McGregor, Hammond, Daykin, Baud, Fisher, and Jamieson."

At the end of this round Carlton were in 5th spot on the ladder with a percentage of 100.0. 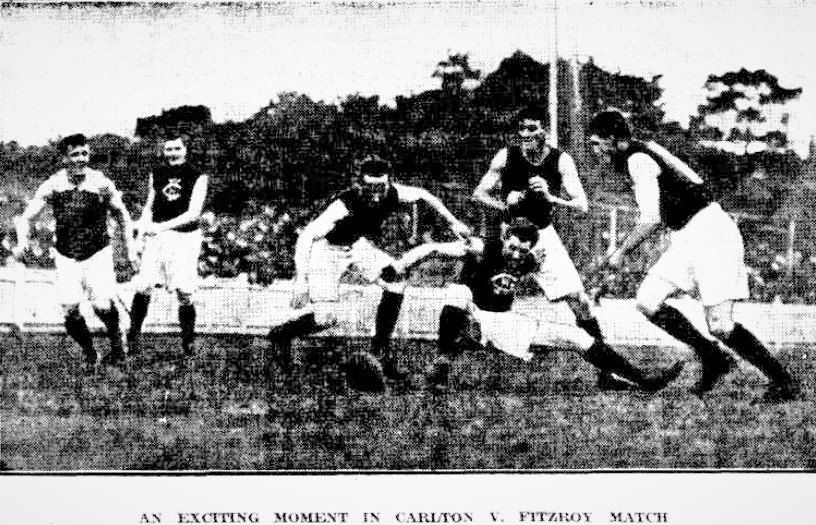