The first League match to be played at the Napier St ground (later to be known as Windy Hill) unfortunately saw the Same Olds prevail. Looking at the scoring pattern in the last 3 quarters it is easy to imagine that the wind may have played a significant part.

At the end of this round Carlton were in 7th spot on the ladder with a percentage of 77.5.

Hoyts cinema chain opened the new Essendon Theatre on Saturday night. Amongst the usual programme of movies, was film of this afternoon's Essendon vs Carlton match. 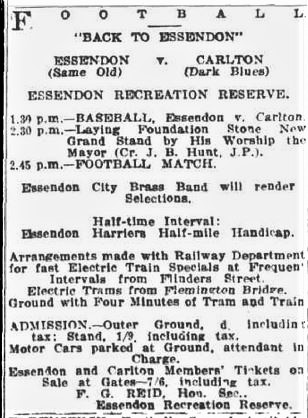 Debuts: Jim Fraser and George Bolt
Interesting Fact: This was the first of 201 games played by Carlton without playing in a Grand Final