On this fine Saturday afternoon, a huge crowd estimated at more than 37,000 packed into Princes Park to see the Blues take on a new-look South Melbourne team that had been bolstered by the recruitment of a bevy of interstate stars, including young Tasmanian sensation Laurie Nash. Carlton selected an experienced side with no first-gamers, and welcomed back vice-captain Tommy Downs, who had completed a harsh suspension of a season and a half for an offence that (it was later revealed) he hadn’t committed.

At the Thursday night training session prior to the season opener, the Carlton players elected Frank Gill as captain and Tommy Downs as vice-captain. Downs had served his lengthy suspension and his return was welcomed by all at the club. No new faces were selected for the game against South Melbourne, and Jim Park was included to play his second game.

Also on the Thursday night, the board granted clearances to the following players – Jack Haskett to Nth Melbourne, Bruce Scharp to Hawthorn, Bernie O’BrIen to Footscray and Frank O’Rourke to Fitzroy. The board refused the clearance of Ralph Green to Collingwood.


The game was a classic, with the teams locked together throughout, before the Blues charged home from behind to win by four points. South led by one point at half-time, and three points at the last change, even as the match was marred by stone throwing from the terraces. Several players, one of the goal umpires and field umpire Percy Ellingsen were hit by missiles thrown from the crowd.

On an overcast but calm day with a slight breeze blowing across the ground, Carlton kicked to the new stand end. From the opening bounce, the ball went to Clarke, who was awarded a free kick. He kicked to Little who passed to Vallence and he kicked the first goal off the ground after a South Melbourne defender’s mistake. South attacked strongly twice, but both were repelled after fine marks from Gill. Play was fast and willing, and both sides were making nervous mistakes. Johnson was providing great drive for Carlton but a South attack was rewarded when Gill was caught holding the ball, but only a behind was scored. Both defences were doing well. South Melbourne registered their first goal with a snap to take the lead. Street marked well and cleared to Crisp but the elusive forward could only manage a point. Another fine mark to Street resulted in a neat pass to Vallence for Carlton’s second goal. South responded immediately with their second goal. Carlton were winning in the ruck and were using the long kicking game well. Green, who had been quiet, kicked forward to Davey, who took a fine tumbling mark right in front. He kicked truly for the third goal. Carlton’s fourth goal came after Bullen, with fine ruck work, passed to Vallence. The quarter ended with Carlton leading by seven points; South had been wasteful with 2-6 their return for the quarter.

Park and Gilby stopped two South Melbourne attacks at the opening of the second quarter. Carlton were attacking strongly and South’s defence was under great pressure. Bullen was playing well. South’s third levelled the scores but good work from Oprey and Clarke sent the ball to Crisp, who snapped Carlton’s fifth goal. Cooper replaced Shea (bruised thigh) and soon after passed to Vallence who kicked the sixth goal from a great kick. A huge kick of seventy yards from the centre which sailed clean through goal provided South Melbourne with their fourth goal. Another shortly after put them back in the hunt. Vallence restored the lead with his fifth goal late in the quarter. But a late goal to South near the bell gave them a one point lead after a tough first half. Gill, Street, Bullen, Vallence and Kelly had been Carlton’s best for the half. South had again been wasteful, kicking 6-12.

In a torrid and hard fought term, Vallence opened the scoring with a near vertical goal kick over his head. A South goal immediately levelled the scores. Bullen missed an easy chance after marking a defensive South kick out. Good team work from South Melbourne resulted in their eighth goal. Carlton responded after a chain of passes from Gilby, Little and Green got the ball to Vallence. His shot fell short and was luckily marked by Davey who goaled. South surged forward and a sure goal was denied when the ball bounced amazingly on the line to only score a behind. However, a South goal late in the term gave them a three point lead in the final change. Carlton looked like they were tiring as South had answered any score.

After an impressive entry into the game, Nash was shifted into the ruck at the start of the last quarter. He kicked two quick goals to stretch the Bloods’ advantage to 15 points, but the Blues wouldn’t be shaken off and kept attacking. Having a fine game, Carlton forward Jack Green then took two telling marks. He goaled from the first, and from the second sent a skimming pass to Charlie Davey, who added another. South swept back into attack and as the crowd reached fever pitch, a section of the perimeter fence collapsed and the game was delayed as a police cordon was formed.

At the restart, and with only minutes to play, Carlton was in front by 5 points and desperately defending against wave after wave of attacks. South’s Bertram snapped a point, then Bob Pratt – their champion full-forward – was awarded a free kick wide out on a flank. His long drop-kick shot on goal looked good at first, but drifted wide to hit the point post, and Carlton held on to win.

Harry Vallence at full-forward and Frank Gill at full-back were the stars for the Blues. ‘Soapy’ kicked 7.3 in a masterful display, while Gill made Pratt play out wide and take his shots on goal from difficult angles. Pratt got plenty of the ball – he kicked 5.10 – but none of his shots were easy. Other good players for the Blues were Bullen, Street, Park, Gilby, and Huxtable.

The Sporting Globe April 29; "One of the spectators was an old Carlton supporter with his cockatoo, which always shouted 'Come on the Blues.'
That would be Mr. Bob St. Marr and the famous "Cocky Marr," see Carlton Mascots

The fever pitch excitement near the finish of the game was too much for Carlton trainer Charlie Anderson and club secretary Patrick J. Cain who both collapsed, however, they soon recovered to enjoy the Blues' hard fought victory.

Laurie Nash went on to a glittering career in the VFL and the VFA, playing in South’s 1933 Premiership team and once kicking 18 goals in an interstate match for Victoria.
He is well-remembered for his cheeky reply to a reporter who asked him late in his career; “Laurie, who is the best player you have ever seen?”
“Son,” said Nash, “I see him every morning when I’m shaving!”

Umpire Ellingsen might require further instruction. During Carlton's win over South Melbourne, he gave a free kick to a Carlton player, and took the number of the South player who felled him - but failed to make a report after the match. - 100 Years of Australian Rules Football.

At the end of this round Carlton were in 4th spot on the ladder with a percentage of 104.8.


The caption says; "An incident in the Australian Rules football match between Carlton and South Melbourne at Carlton (Vic). Hillis, of South Melbourne, is seen amid very willing play, right in front of Carlton's goal.
From this play Hillis received a free kick."
Image: Trove: The Referee, Sydney, May 03
No.17 for Carlton is Charlie Davey. "Micky" Crisp far left, & Ansell Clarke (31) is far right
Remarkably, although taken from different angles, these two photos were taken at precisely the same moment! 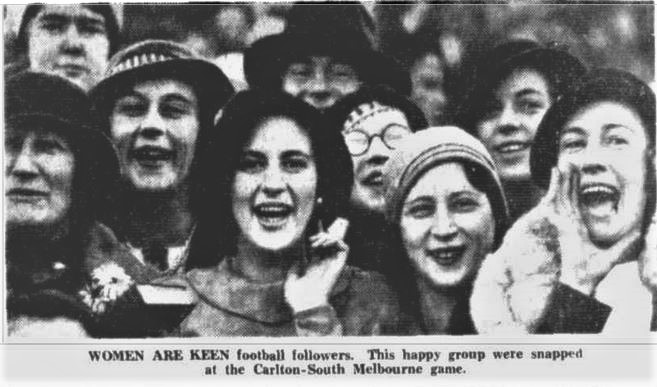