Carlton began another season with a loss - by 27 points to Richmond at the MCG.

After a controversial off-season centreing on the ongoing Essendon supplements scandal, the 2015 AFL season officially began when Carlton met Richmond in this first-round blockbuster on Easter Thursday night at the MCG. In front of 83,000 on a cool, clear Melbourne evening, the Blues bounced out to a good lead early, but stopped as if shot in the second term to be over-run by five goals. 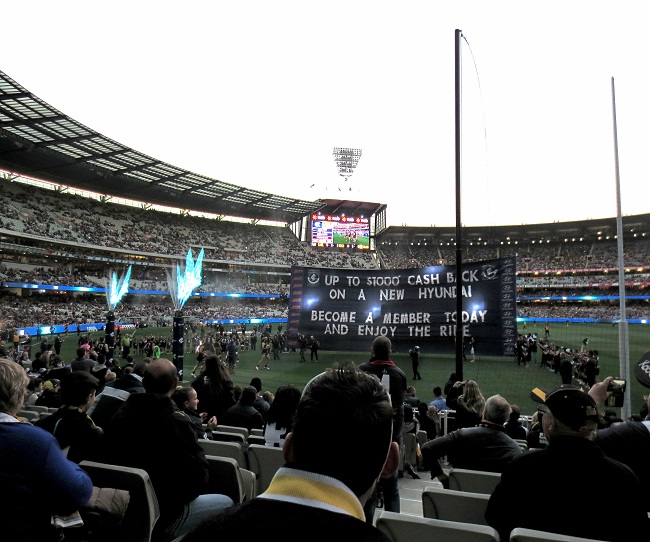 Since September of the previous year, Carlton had turned over the clubs’ list to the widespread approval of supporters, and the line-up that took to the field against the Tigers reflected those changes. There were seven omissions from the team that ended 2014 with a disappointing draw against Essendon, with Jarrad Waite, Brock McLean, Kane Lucas, Matthew Watson, Dennis Armfield, Levi Casboult and Ciaran Sheehan all missing for a variety of reasons. Into the side in their place came captain Marc Murphy, Lachie Henderson, Dale Thomas, Andrejs Everitt and three recruits making their debut for the Blues in Kristian Jaksch, Liam Jones and Clem Smith – who was designated as the Blues’ substitute.

After a loud, rather frantic pre-game lightshow and fireworks display, Murphy won the toss and kicked with a slight breeze to the city end of the ground. From the opening bounce, every player hunted the football with ferocity, and it proved costly to both sides. Carlton scored first when Liam Jones goaled with his first kick for his new club, but the Blues’ fans joy was immediately tempered by the sight of Dale Thomas being helped from the ground with a dislocated left shoulder. Before six minutes had elapsed, Clem Smith was on the ground as Carlton’s substitute, after Richmond’s Brett Deledio had been reported by a field umpire for a high hit on Simon White.

As the quarter unfolded, Carlton got on top around the packs, and should have led by more than 16 points at quarter time. The Blues had missed at least three shots on goal from close-in, and they were to prove very costly. Five minutes into the second term, Troy Menzel kicked truly from 15 metres to put Carlton 23 points up, and a Blues supporter in the crowd was heard to shout, “the floodgates are opening!” He spoke too soon however, because from that time on, Carlton did not score another major until five minutes into the last quarter. Meanwhile, Richmond grew in confidence and kicked seven unanswered goals, as their midfielders took control and their forwards reaped the benefits.

The Tigers were in front by 19 points at three-quarter time, and kept their foot on the throttle to win by 27 on the final siren. On a night when Blues fans faced the prospect of another long season, it was almost impossible to find any positives from this defeat, apart from the efforts of Sam Docherty, Chris Judd, Tom Bell and Kristian Jaksch.

Docherty was Carlton’s only clear winner on the night, and his grit under constant pressure set an example that too many of team-mates couldn’t or wouldn’t match. Judd’s broad shoulders carried the Blues midfield yet again, and Bell was effective in bursts. Jaksch tried hard in defence and attack, before finishing the match with a couple of broken ribs for his trouble.