The Blues attacked from the bounce and Charlie Hammond kicked to Alex Barningham. His difficult angled shot resulted in a behind. The Students went forward for a minor score and then from a scrimmage on the Blues' forward line Alex Barningham kicked the first goal of the game. University then scored their first goal. Carlton retaliated with a snapped goal to Jack Baquie and another to Alex Barningham. Fred Elliott then managed a behind. Play then for the remainder of the term swung to the University forward line where they added 1.2 At quarter time Carlton led by 4 points, 3.2 - 2.4
A new ball was bought onto the ground for the start of the second quarter. The idea was that the used ball would be cleaned and dried for use in the third term. Despite now kicking against the breeze University took it right up to the Blues and should have had a greater lead at half time. They had kept Carlton goal less with the Blues only scoring a couple of behinds. The back line was under constant pressure with Charlie Hammond, Billy Payne and George Johnson working overtime. Wing man George Bruce and rover Jack Baquie were other good Carlton players in this term. At half time the Blues trailled by 8 points, 3.4 - 4.6
University increased it's lead with a goal soon after the restart. Carlton then added three quick goals, a snap to Harvey Kelly, was followed by goals to Jack Baquie and Vin Gardiner and then a couple of behinds. The Blues now led by six points. The Varsity responded and Alex Lang under pressure was forced to rush a behind to the Students. Then they added two goals and regained the lead by six points. The third quarter had been the fastest and most interesting term. Could University repeat it's Round 1, 1909 success when they met the strife torn Blues?
It was not to be as Carlton completely dominated the final term, University were shut out of the game. Carlton's pace and stamina was too much for the nonplussed Students who failed to add to their score. Goal scorers for this term were rover Alex Lang with the first two goals and singles to Fred Elliott for the ninth and then finally George Topping. The Blues won by 20 points, 10.9 - 7.7


At the end of this round Carlton were in 2nd spot on the ladder with a percentage of 118.7. 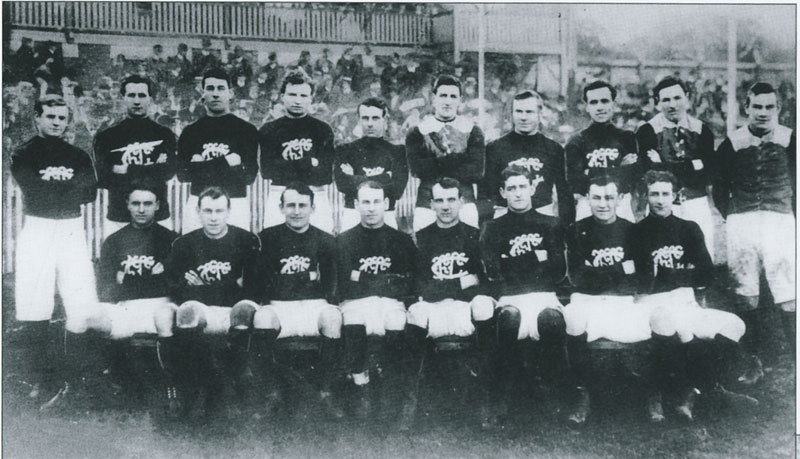