Colin Martyn, with a dislocated finger injury, could not be considered for this game. The unfortunate skipper was now the only player on Carlton’s injury list. This game was Joe Kelly’s 100th for the Blues. Marked superiority in the air, combined with great pace and more system were the main factors in a dominant victory for Carlton in this game.

The game began evenly with both sides having patches of fine play. Carlton, kicking with the wind and winning on the wings, was in attack early through Kelly, and goals to Vallence and Davey resulted in a thirteen point lead. The last ten minutes, however, was all Essendon, and three goals gave the visitors a four point lead at the first change. Carlton picked up the pace in the second term, and quickly became the dominant side, winning all over the ground. Essendon’s defence fell apart under relentless Carlton attacks. Davey was unbeatable in the air and Vallence was playing well in attack. When the half time siren sounded, Carlton had kicked 8-5 to Essendon’s four behinds to take an imposing 45 point lead.

The Blues continued where they left off when play resumed and continued to score freely. Mackie and Gill were almost impassable in defence, Kelly, Crisp and Cooper were picking up kicks at will and Vallence and Jack Green were well on top up forward. Carlton had a 64 point lead at three quarter time.

In the last term, Essendon rallied, and the game became quite fierce and physical. Weight was thrown around freely by both sides. Carlton led by 83 points late in the game, and they eased down in the last few minutes, allowing Essendon kicked four goals. The final siren resulted in a 65 point victory for Carlton. The only sour note in a commanding performance was a groin injury to Fred Gilby late in the game. He was replaced by Williams.

In an unfortunate incident in the reserves game played at Windy Hill, S. Bloomer for Carlton received a bad knock to the body and was admitted to the Melbourne Hospital. He was diagnosed as suffering from a ruptured kidney.

'Soapy' Vallence scored another eight goals in this match and moved to the top of the league goalkicking list.

At the end of this round Carlton were in 2nd spot on the ladder with a percentage of 132.2. 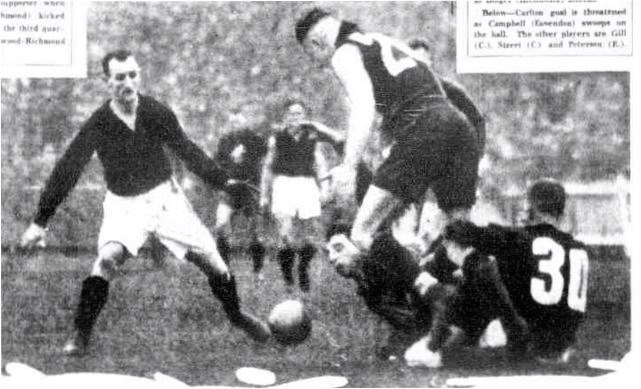 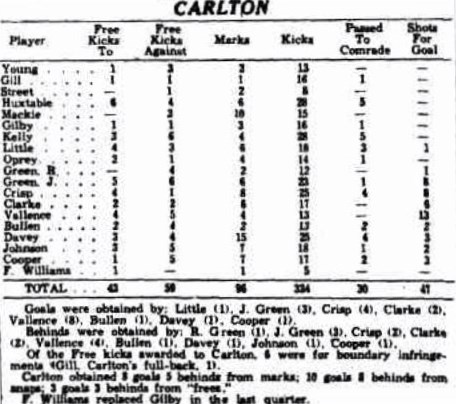 Charlie Street (21) and fullback Frank Gill on the ground near the ball.
Both images from the Sporting Globe July 13, & Stats July 09